Just as business owners begin to cautiously feel a little optimistic about surviving the pandemic, they are being reminded that America was first, and is still, dealing with our epidemic; workplace shootings.

In March 2021 alone, there have been 17 workplace shootings. Five of those are considered mass shootings where four or more people were killed, not including the assailant. It’s time to take a long hard look at how a shooting could affect your business. And I know, It’s not going to happen to you, but the reality is every single business that has ever been the location of a mass shooting all had one thing in common; they also thought it would never happen to them.

Workplace Shootings by the Numbers

Police entering 7-11 in response to incident of a customer holding two employees at gun and knife point at nearby Subway. Photo courtesy of Jody Taylor of Sixty5 Media.

Sadly, the terms active shooter and mass shooting have become the verbal equivalent of a car alarm going off in the parking lot that we all hear but ignore unless it belongs to our car. But as we all know there are two ways to deal with potential problems: ignore them or prepare for them. Surprisingly, while almost all business owners have a well stocked first aid kit, at least one smoke alarm, fire extinguishing equipment, and an emergency exit plan, you and your employees are more likely to be injured or killed at work from a workplace shooting than a fire. Yet the majority of business owners are more prepared for a fire and not an active shooter.

You are not alone. Nearly 2 million U.S. workers become the victims of workplace violence every year, yet only 25% of all companies are prepared for an active shooter incident and 100% of the companies that experience a workplace shooting have some form of financial liability that they pay out for. According to the Department of Labor and Statistics, 454 workplace homicides happened in 2019 and the majority of those deaths were from workplace shootings.

Nearly all workplace shootings are done out of an act of revenge. Whether that being a romantic partner, a co-worker, a previously terminated employee, or disgruntled vendor. Often there are red flags that were missed and sometimes there are no signs at all like in the 2018 mass shooting at Borderline Bar and Grill in Thousand Oaks, California. Thirteen people were shot and killed by a young military veteran who posted on social media during his mass shooting, and said “It’s too bad I won’t get to see all the illogical and pathetic reasons people will put in my mouth as to why I did it. Fact is I had no reason to do it, and I just thought…f***it, life is boring so why not?”

In either of these scenarios things often escalate rapidly so prevention and pre-planning in the same ways you would for a fire or natural disaster are not only key, but in keeping in line with the U.S. Occupational Health and Safety Administration’s General Duty Clause. It is now being considered crucial to increase safety and minimize liability where the financial aftermath of a shooting can be astronomical.

In 2019 MGM Resorts International, which owns the hotel Mandalay Bay where a gunman opened fire from his room onto a country music festival in 2017 killing 58 and wounding hundreds of others, agreed to pay up to $800 million to settle lawsuits filed by victims who claimed that MGM employees were negligent in allowing the killer to stockpile weapons and ammunition at its Mandalay Bay hotel. To date, no motive is known.

So what can you do to prevent your business from becoming the next location? Maybe nothing, but you can certainly prepare for it and minimize the chances of the shooter being an employee while also minimizing the potential loss of life and financial loss no matter who the shooter is.

How to Prepare for an Active Shooter in the Workplace

For starters, it is highly advisable to create an “interdisciplinary threat assessment team” and to offer an open door policy for grievances. One alarming similarity in active shooters is their need to be heard or recognized. This will also allow you an opportunity to note how an employee responds to discipline, especially if you feel termination will be eminent. Many businesses are now using the ALICE, (which stands for Alert, Lockdown, Inform, Counter, Evacuate) training program.

In doing additional research, these were the top 5 most advisable steps in prevention and preparation for an active shooter at your business.

Again, I cannot stress enough the need for you and your company to invest in preparation. The U.S. Department of Homeland Security offers free courses, materials, and workshops to better prepare businesses for an active shooter situation, so I advise each of you to contact them for more information at ASworkshop@hq.dhs.gov. The FBI also offers resources for small business owners at, https://www.fbi.gov/about/partnerships/office-of-partner-engagement/active-shooter-resources.

You are not just protecting the lives of yourself, your employees and customers, but the life of your brand and your future livelihood as a business owner.

What are your thoughts on preparing for an active shooter in the workplace? Let us know down in the comments. 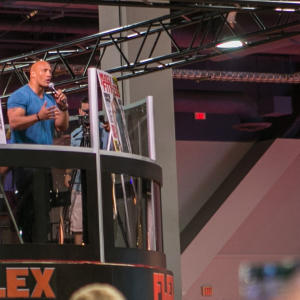 Dwayne “The Rock” Johnson Is Now The Owner Of The XFL

Listen to this article now Former wrestling star turned action hero Dwayne “The Rock” Johnson, together with his ex-wife his,...