What is a maverick? Someone who breaks the rules achieves success and changes the world.

Contents
Who is Marc Randolph?Mail Order PrideAn Unlikely TurnThat Will Never WorkWhat Keeps Him Up at Night?If He had a Billboard for 24 Hours, What Would it Say?

Who is Marc Randolph?

Marc Randolph is an author, mentor, investor, and “veteran Silicon Valley entrepreneur” of over forty years. He is most widely recognized for co-founding Netflix along with Reed Hastings. Recently, he published the national bestseller That Will Never Work: The Birth of Netflix and the Amazing Life of an Idea. His book details Netflix’s journey from a struggling startup to the most powerful online streaming service today.

By introducing Netflix in 1998, Marc helped changed the way we consume digital media. During the 80s and 90s, Blockbuster Video dominated the movie rental industry. Having started his career running mail orders for a sheet music company called Cherry Lane, Marc gained the experience needed to eventually disrupt that industry. Netflix’s mail-order system revolutionized our ability to rent movies from the convenience of our own homes and opened the doors to online streaming as we know it today. Now Netflix has ballooned into a multi-billion dollar company and has paved the way for other streaming services that also produce original content.

Before launching Netflix, Marc graduated from Hamilton College with a degree in geology. His first job was working at his mother’s realty company where he claims to have been “the worst real estate agent in New York.” Soon after, he landed a job as executive assistant to the CEO of Cherry Lane. Needless to say, his journey to tech entrepreneurship was one he did not expect.

After studying how the CEO of Cherry Lane lived and breathed, Marc was given the chance to run the mail order division. Later, he took this knowledge to found several successful startups. One of these was Integrity QA, a quality assurance software company that was bought by Reed Hastings’ company, Pure Atria, in 1996. When Pure Atria was also acquired, Marc and Reed took the opportunity to come up with new startup ideas.

They bounced around several possibilities, including personalized shampoo and custom baseball bats. What attracted them to movie rentals was the fact that Blockbuster was the biggest player, yet they were completely dependent on customers stepping into their stores. Marc and Reed saw an opportunity to disrupt that industry and placed their bets on mail-order DVDs. “You want a big enough category that, if you’re successful, you have enough room to run. You want a disruptable environment,” says Marc.

That Will Never Work

By the spring of ’98, Marc and Reed had enough capital to launch Netflix. However, it wasn’t an overnight success. Marc says they made about a thousand mistakes and even turned to Blockbuster to take a stake in their company. Blockbuster refused, so ultimately Marc took a page from his magazine days and implemented a subscription service for online streaming. This strategic move struck gold and the rest is Netflix history.

After stepping away from Netflix in 2002, Marc now dedicates himself to doing what he loves most: mentoring other entrepreneurs and helping get their startups off the ground. He has helped seed dozens of tech startups and currently serves as the director for Looker, an analytics software company run by CEO Frank Bien. He also fuels his passion for helping the environment as a board member on 1% For The Planet. This non-profit has raised over $200M donations since its launch in 2002.

Marc’s advice for startup owners is to choose an industry that allows you to mess up until you get it right. If it’s something people are invested in enough, they are willing to look past the mistakes. “Heart of a startup is you can’t see the future and you have to stumble along. The trick is not avoiding errors. It’s figuring out a way to make as many errors as you possibly can.”

“For the last 15 years I’ve been keeping my startup addiction under control by mentoring other early-stage entrepreneurs, helping them tackle some of the tricky issues involved in getting a startup off the ground. And although it’s tremendously exciting, it’s hard to shut off your mind when you’re working on a particularly interesting puzzle. Unfortunately, for me, I tend to sleep like a baby until about 3:00 am when for some inexplicable reason, the latest business problem chooses to start crying in its crib. Good luck getting back to sleep after that.

“Oh…and wondering if I remembered to shut the lid on the hot tub.”

If He had a Billboard for 24 Hours, What Would it Say?

“Success has been defined as the ability to go from failure to failure without losing enthusiasm.” 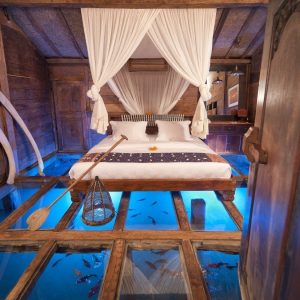 This Hotel Gives You a Little Slice of Paradise

ali, Indonesia is a must-visit destination for any dedicated adventurer. From its lush forests to its vibrant wildlife there’s plenty...