In parenting, what you do overrides what you say. Greg’s story highlights the harm absentee parenting can inflict on a child and what efforts can be made to reverse it.

Contents
Greg, The TeacherParents of the 60s Worsening Situation After Conversion Years of AddictionHelp and Lessons LearnedThe Merits of Being Present

A certificated teacher for 24 years, Greg has been working with the youth for much longer. His mother, a concert pianist, worked for a large construction company in California. Greg’s career-driven mother returned to work full-time two months after he was born.

Parents of the 60s

For the first eight years, Greg lived in northern California with his “absentee” parents. A smart boy raised by nannies, he adjusted, living his own life, getting involved in sports and joining a swimming team. At seven years old and in 2nd grade, he was placed in a gifted learners class. His father, a pharmaceutical drug salesman in the 60s, drank heavily. His mother had access to a slew of drugs, thanks to his father.

One day, at a small Billy Graham revival north of San Francisco, Greg’s parents converted to Christianity. The year he turned eight, the family moved to Alaska and got involved with a local evangelical church. Although his parents did their best to build a relationship with him, the boy felt no bond to them. He started overeating almost immediately, finding temporary solace in food. He discovered drinking when his father, who continued to drink after his conversion, let him taste beer around his 13th birthday.

In the 70s, nearly everybody smoked pot. When Greg was 14, he started smoking too. He did several hard drugs, except heroine, every day from the time he was 15 until he turned 28.

Around 29, Greg woke up one morning and realized the road he was riding was speeding to an ugly end. He had only two choices; continue and die, or change drastically. Which road did he want to take? When he woke up after 15 years of being intoxicated—even though he had two college degrees, had been married, held many jobs—he was only earning minimum wage, and barely paid his bills. “I can’t do this anymore,” he told himself.

He reached out to friends who put him on his path to recovery. Greg knew then the type of parent he would become…a parent unlike those who raised him. Sticking to the right path, Greg has been involved with his kids since birth. He wanted to be (and has succeeded in being) the present and consistent parent.

His oldest daughter was raised in a horrendous household. Her mother died 12 years ago. Other members of her family tried to keep her away from Greg. She finally decided when she was old enough to seek him out. He’s since become close friends with her. Even when she wasn’t living with him, Greg was the consistent parent, always desiring the best for her.

She graduated from college and has a good job. She still looks around and asks, “How did I get here?” “Well, I helped you a little bit, too,” Greg would say.

The Merits of Being Present

For his two children with his current wife, the one thing he learned at the onset was to discover areas where they excelled and find opportunities to foster those talents. This implied being present for them.

Today, Greg’s son is a musician. They discovered music together and found ways to incorporate harmony into everything they did. At nineteen, Greg’s son still lives at home, but is successful and fairly independent.

Greg’s youngest daughter, a gifted athlete, has incredible ideas and is growing more and more. In the last year, she’s gained self-confidence and is also independent. Again, Greg finds chances to bond with his daughter through her pursuits and interests. He encourages her to keep thinking big and talk about them openly.

He tells his three children, “This is what you’re good at. Tell me more about why you think you’re good at this or why you’re really good at what you do.” He listens for things in their conversations and finds ways to show positive reinforcement. Greg, the wounded healer, reversed the absentee parenting curse that he experienced. For his children, he’s the consistent, present parent he never had as a child.

What experiences have you had overcoming absentee parenting? Let us know down in the comments.

The author of Thirst No More: A Fable of Hope and Forgiveness and Ready for Your Love and Other Poems, Kwami Nyamidie is an award-winning poet and freelance writer. He holds a Master of Arts in Transforming Spirituality from Seattle University. A U.S. citizen, Kwami lives in the Pacific Northwest where he’s currently working on a nonfiction book about mothers. 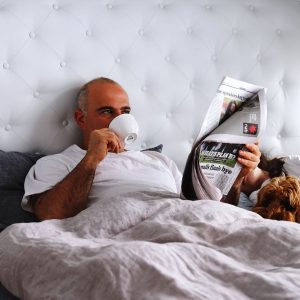 Listen to this article now As the pandemic rages on, it’s hard to feel like you have control in your...