Vlogging is one of the most interesting and world-explorative things today. If you’re an entrepreneur and want to start vlogging but have no clue about cameras and equipment for vlogging, then this article will help you greatly. Even if you’re changing your existing camera, this will guide you in buying your next dream camera. Although there are many cameras out in the market, choosing one for yourself is a difficult decision, especially if you’re not so technical.

We will also discuss the external accessories you should buy for your vlogging camera, e.g microphones, lenses, and mini tripods. All features and cameras are also beginner-friendly.

The reason we chose this camera is that it has a high positive rating and a cheaper price when compared to its features. Sony Alpha is a vlogging camera that has a compact portable size and is designed for professional vloggers. It has a total width of 11.52cms and a height of 6.42cms, which makes it easier to grasp. By unboxing the camera, you’ll see a Type C charger, battery, warranty papers, wind muff, and a lens of 15mm attached to the camera in its box. Let’s further look into what features make it the best camera for vlogging or filming.

The camera is about 24.2 megapixels with real-time eye autofocus, meaning it will automatically focus on your eyes. You can turn off the real-time eye autofocus in case you don’t need it. It can also blur the background easily by pressing the blur button. It has a 4k (3,840 x 2,160 pixels) resolution video recording and snaps shooting capability. It will also automatically recognize your face and will focus on it throughout the video/image.

Sony Alpha ZV-E10 has a lithium-ion battery of 1500mAh. Once the battery is charged it can capture 440 shots and can record 125 minutes of video continuously. If you’re an outdoor type then you can extend its charging capacity by plugging in a Type C USB connector as it supports charging from a USB wire. If you want to use it for live streaming on YouTube or other platforms then you only have to connect a Type C charger. And don’t worry about damaging the battery. Type C connectors are not only designed for charging but can also transfer data from your camera to PC. You don’t need to remove SD cards again and again for transferring data to your PC.

You’re not only restricted to the one pre-installed 15mm lens but you can also buy other lenses for the camera as its lens can be changed because it is an interchangeable-lens camera. Sony has designed about 60 lenses for every Sony Camera which means 60 lenses can be attached to this camera which makes it more unique than others. You can capture distant objects such as planes with a telephoto lens with all the real eye details. You can find out more about lenses here. The camera also has a windscreen for the microphone which prevents catching any extra noises like the sound of the wind on a motorcycle or windy weather.

The monitor of the camera is 7.5cm. Its angle can also be changed for a selfie mode. You can clearly watch all the images and videos on its monitor in high quality. You can also shoot a video vertically by adjusting the monitor accordingly. This camera also has a variety of photo effects like the effects on most phones, such as black and white. You only have to apply it in the settings. The camera automatically increases brightness in a dark place without disturbing the picture hues or quality. It will also give you a clear detailed skin tone image. You can put a lot of filters on your images within the camera for a perfect shot.

With theSony Alpha ZV-E10, you’re not confined to only use the pre-installed camera equipment, but can also install external accessories. By installing external equipment, it will help you capture a more perfect memorable video and image. In external accessories, you can buy an extra backup battery so you’ll not have to worry about the camera’s charging in case you go out for a long drive. The second battery can also be used as an emergency battery in case of a power outage.

Buying an external microphone such as a rode microphone is also one of the best decisions in order to make your sound more clear. As you know light plays a vital role in a perfect image, which is why Sony has made a variety of flashlights for this camera. Buying an external flashlight will make the darkest place brighter especially if you’re camping at night in a remote area. It is much brighter than the pre-installed. Finally one of the most important parts of external equipment for this camera includes a shooting grip or a tripod stand. A shooting grip can make your vlogging more enjoyable and easier because it has also a wireless commander, which makes it more suitable for the camera.

We hope this article helped you understand all the features of this camera. Our aim was to show the best camera for vlogging to save entrepreneurs time. Unlike other cameras, this camera is mirrorless which means it will not show you a reflected image. This camera was released in July 2021. If you have any other questions regarding this camera you can check out Sony’s website or even watch the unboxing video above.

What do you think is the best vlogging camera for 2022? Let us know down in the comments.

We Asked Our Founder Community What Insights They Learned This Year. Here’s What They Said 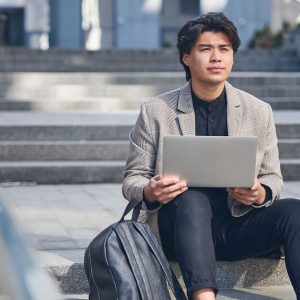 Can Anyone Be an Entrepreneur?

Listen to this article now Many of us are told “anything is possible as long as you put your mind...