Brennyn Lark is a star on the rise. She went from playing Eponine in Les Miserables on Broadway just a few years ago to the starring role in Dreamgirls in London, with a host of other roles along the way. Now, she is taking her talents to the small screen in the upcoming season of Amazon’s The Marvelous Mrs. Maisel.

I recently caught up with Brennyn to chat GenXer to Millennial about her new character, Dawn, and what it has been like playing period roles, particularly wearing the fashion trends that existed before we both were born. Full disclosure, Brennyn and I are cousins. Our mothers are sisters. Still, it was nice to have this talk because I didn’t have to do the type of introductions a journalist usually does to familiarize themselves with an artist. Because of our familial relationship, the interview was a bit more structured and has been edited for space and consistency.

A: The first question I wanted to ask you is this: you’ve played in different periods roles. Which one did you like playing the best and why?

B: Well, so far, I’ve loved playing Deena Jones in Dreamgirls ‘cause that was always a dream role of mine. Her storyline and the trajectory is just greater than the other roles that I’ve played. There hasn’t been so much detail [in other characters] in other roles as there is in how it pertains to her journey. I’ve had the luxury of understanding and learning Deena, so I think that I’m kind of biased in that way because I just know so much about that character and the writing and everything gives so much to her. So I definitely enjoyed playing Deena the most.

A: This new character in The Marvelous Mrs. Maisel, tell me about her.

B: My character, you know, she’s a background singer to the character Shy Baldwin, and I’m one of the singers. We’re kind of another girl group similar to Dreamgirls, but we’re just singing background to him. Her name is Dawn and we’re kinda just on the road with him, you know, supporting him musically.

A: Now The Marvelous Mrs. Maisel takes place in the 50s and Dreamgirls starts in the 60s. Which fashion era do you like better, the 50s or 60s? I think in the 50s, women started to wear pants, but were much more conservative with their fashion than in the 60s.

B: Yeah, I mean it’s so tricky ‘cause I definitely like both. I just like the idea that everyone was so put together and it was very much an ensemble. It was effort, so anything that has that ring to it, I’m already sold because I feel like right now, we kind of get lazy in the fashion arena. I was speaking to a friend the other day about the 50s and 60s and if you went to fly on an airplane or if you went to the theatre, it was an event. You dressed to the nines for that. I’m definitely a strong supporter of that idea.

I definitely do like the 60s ‘cause we did get a little sexier. We weren’t as apprehensive when it comes to showing a little bit of skin and I’m definitely a supporter of women’s bodies and sexuality. So maybe I will say the 60s. I definitely did enjoy the fabric and the patterns of the 50s. I think it was very regal and very well put together in that way. It’s kind of a toss up ‘cause I think it just depends on the mood that you’re in and you might wanna go a little more conservative like with the 50s. Then you might want to feel a little more, you know, that divine feminine energy in the 60s. So, kind of tricky to decide.

A: Now about the hair ‘cause the hairstyles were very different and especially for black women. Let’s talk about perm (relaxer) care. There’s of course, you know, the pink rollers and all that stuff. Moving through different decades in Dreamgirls, you go through several different hairstyle changes as opposed to a particular character in The Marvelous Ms. Maisel. How have the hair fashion experiences differed?

B: In Dreamgirls, we traveled from the 50s to the 60s, we go into the late 60s, we’re almost getting to the 70s, which is that disco era. I think the storyline kind of chronicles where we are period wise, which is kind of amazing about Dreamgirls. You don’t even need to hear any lines or any context. You can see where we are just based on what we’re wearing. Kind of piggybacking on what I said about bold fashion moves as we get into the 60s, it’s more about the bigger hair and things of that nature. I think as black women, we’ve all kind of had a fascination with hair and it’s always kind of evolved, but one thing that we always had to make sure is that our hair was put together.

Definitely in the 50s, it was about the press and the set, and whatnot— but it had to be together. So I definitely loved that about the 50s. I’m trying to think of the specific wigs I wear. We wore our wigs. Definitely, the jig’s up! We’re definitely wigged. I just remember, my opening wig in Dreamgirls is similar to the wigs I’m wearing in Maisel, which is kind of like a short, kind of pearled. Even though the periods changed and the hair evolved, one thing that remains the same is the care and nurturing of the hair. That always remained. It doesn’t matter what period you’re in. That hair has to be in tact.

A: Are there other aspects of the fashion worn across any of your roles that you have adapted to your regular, daily ensembles?

B: You know what? Being a New Yorker, I’m definitely a neutral girl. I love my neutral colors. I love my cream colors and my off-whites, and my blacks, and black and some more black! So having a show, specifically speaking of Dreamgirls, we’ve got to a lot of colors and I started finding that one of the main color motifs in Dreamgirls—the costume director, Greg—he designed a lot of purple! Just subconsciously, I started seeing a lot of purple in my closet. I didn’t even realize it. I was like, oh I’ve got some shades of lavender and some lilacs, and that’s definitely a Dreamgirls thing, you know.

There’s a number in Dreamgirls, I have a light, sort of purple—that is covered in crystal and a purple feather boa. And then my all-time favorite costume in the whole show is this purple jumpsuit that is just…tailored to perfection! And I love that. So I would say that, in terms of my color palette, that’s kind of shifted. Stylistically, I’m not mad at a more feminine inspired dress. I definitely, like I said, like to be sexy sometimes and show some skin so I definitely like a little mini LBD (little black dress) showing some leg and stuff. But after doing Dreamgirls, I found myself, kind of toning that down a bit and going on the more feminine, sort of floral print—patterns, playing with mid-length dresses instead of a cute little mini dress. So I think that might have inspired some of my current style choices.

A: When can people see you on The Marvelous Mrs. Maisel?

B: We don’t really have exact dates but, just judging from the fact that there was a Christmas tree in our set, I’m gonna go out on a limb and say that it should be coming out around, probably, end of this year, maybe even going into early 2020. It streams on Amazon. So far, we’ve filmed a lot of production members, so a lot of movement and we’re singing a bit and editing and whatnot. We’ve spent hours in the recording studio doing some tracks for the project, so I’m interested to see what makes it and what doesn’t. But I know we’ve all been working, the girls and I, really hard on our steps and our tracks and whatnot.

A: Like Empire, we shall see what happens next year.

B: Right! There’s always next year.

Are there any other up-and-coming stars we should know about? Let us know down in the comments!

The Ideal Smartphone To Get Things Done 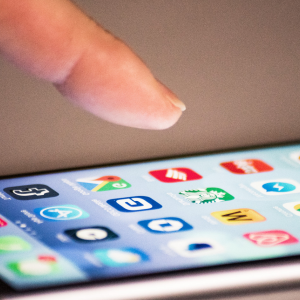 Listen to this article now Ecommerce has come to stay, the market keeps growing every day. According to Statista, 13.6%...