On March 16th our social and work lives as we knew them came to a halt. Most workers were told to work from home, kids stopped going to school, getting together with a group of friends was out of the question. We were in one giant time-out.

Fortunately 52% of Americans had already been working from home at least once per week. Many were also already video or teleconferencing users, who were using either Skype or Zoom. In fact, as of 2018 64% of companies with 500 or more employees were using Skype for Business, and 72% of companies with 500 or fewer were already using Zoom. But these were business professionals, not average households. So on the grand scheme there were still millions of people who had no clue what Zoom was.

Shortly after the initial stay-at-home orders went into effect, that all changed and the company’s tally of daily users had spiked by nearly 380% from a year earlier, and that’s after the company had already added more than 2.2 million new monthly users in the first two months of 2020. Zoom had confirmed their daily users spiked to 200 million in March, up from 10 million in December, and the Zoom app has been the top free app for iPhones in the United States since March 18th, with only TikTok in front of them.

But why did so many of us turn to Zoom when we had already been using Skype? Well, because many of us actually weren’t using either. Unless your job had you video conferencing, you may have not had a clue what Zoom or Skype was until you saw the hosts of late night TV and other live TV formats using Zoom to do their shows. So between social media and brand name recognition for Zoom, Skype didn’t stand a chance. The second most important reason was simplicity. The average user could set up and use Zoom in minutes so there was no reason to seek out another option. As journalist Adrian Kingsley-Hughes told ZD Net, “Downloading Zoom is a doddle, installing it is painless, and getting people into a meeting is as simple as sending them a link. And while Zoom had security issues that Skype didn’t, most users didn’t seem to care. Whether it was that with Zoom you could change your background to something fun or their built-in beautification filter, security concerns took a backseat. All a large majority of the users seemed to care about was finding a distraction from their quarantine boredom or finding a way to save their job.

Although this is one of the largest increases in unemployment we’ve seen in years, Zoom has played a major role in saving jobs and helping to create new jobs. For Zoom, they have hired 500 new employees in the last quarter, adding to their current roster of 2,000.

Since the initial surge in March, Zoom has been implementable in creating virtual options for schools, churches, weddings, gyms, community events, and even funerals. That also creates a new need for jobs that were not needed before the pandemic. Jobs like tech consultants to set up video conferences, virtual HR staff to conduct interviews on Zoom, and webinar hosts to name a few. For entrepreneurs and small business owners, Zoom has given them an important tool to re-branding their businesses and facilitating another way to offer their services.

For Eric Yuan, the founder of Zoom and a Chinese immigrant who was refused a VISA seven times and couldn’t speak English when he first arrived in America, he finally enjoys going to work but his life now is eating, sleeping, and zooming. Which I guess when you’re the CEO of a company worth as much as General Motors, you’re not partaking in too many of the virtual happy hours.

For the rest of us mere mortals if 2020 has taught us nothing else is that everyone buys toilet paper in a panic, and that comfort zones are a thing of the past. It’s now time to adapt, zoom, and conquer.

Have you had experiencing using Zoom vs Skype? Let us know down in the comments.

Everyone Around You Could Be Bilingual By The Time Lockdowns End 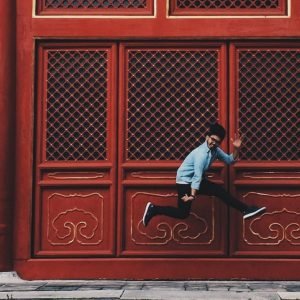 Why Beijing Is A Great Place For Entrepreneurship Culture

Beijing is great for entrepreneurship culture because China is one of the most populated countries. A greater population means more...