Ibe noticed that many of the illustrations in his medical textbooks are not in Black skin. This launched him into studying medical illustration and focusing on Black skin. A little over a year later, Ibe said, the viral images allowed him to pursue a Ph.D. after medical school.

Ibe posted his illustrations on social media and was able to document conditions like empyema thoracic and seborrheic eczema on Black skin. These images showed skin conditions that are prevalent among Black people and it combated a misrepresentation that often leads to misdiagnosis. Skin conditions do not look the same on every skin color, so it is important to have other forms of representation.

It is truly amazing that Ibe has taken the initiative to create Black illustrations because it allows for more diversity in the medical industry. He pushed forth a much-needed conversation about the lack of diversity in medical illustrations.

However, the lack of Black representation in medical textbooks and journals is no secret. Researchers at the University of Pennsylvania found that just 4.5 percent of images in general medicine textbooks show dark skin. This demonstrates that medical journals and textbooks have predominately been centered around White illustrations. It does not show a proper understanding of illnesses or conditions that impact Black people differently. This is a major sign of medical racism and hopefully, new illustrations depicting Black people can advocate for equality in medicine.

What do you think of Chideiebere Ibe’s illustration? Have you noticed the lack of Black representation in medical illustrations? Let us know down in the comments! 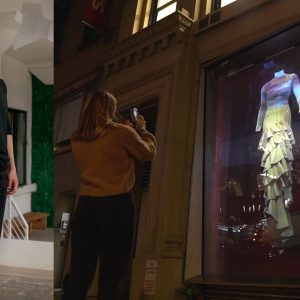 Listen to this article now Visual Feeder transforms unoccupied commercial windows into creative digital displays. This is a unique opportunity...