If being an Emmy Award-winning actress, mother, activist, and online yoga instructor wasn’t enough, Kerry Washington is also a business investor. It was announced earlier this week that Olivia Pope (aka Mira Gaffney to my fellow Psychos) has invested an undisclosed amount into startup Aurate, a women-owned jewelry brand founded by Sophie Kahn and Bouchra Ezzahraoui. Aurate offers high quality gold jewelry at a fraction of the price as traditional retailers. According to their website:

“Fine jewelry deserves fair prices. And so do you. All of our jewelry is born, raised, and handmade in NYC. No import taxes, no unnecessary middlemen, no insane markups. And we produce pieces on a made-to-order basis so that you don’t pay for extra inventory costs. Because we love gold, but not price tags.”

Washington was thrilled at the thought of working with the two female founders who pride themselves on providing beautiful, sustainable jewelry. However, not only is Washington an investor in the company, she is also designing her own jewelry line. The Lioness Collection features gold vermeil necklaces, bracelets, and rings that reference the spirit of a lioness. According to Washington, the inspiration behind her line comes from the Egyptian goddess Sekhmet, which means “She who is powerful”. In Egyptian mythology, Sekhmet is a warrior goddess with the power to transform into a lion and is a patron of healers.

“It’s all about women and the power of women and I can’t wait to give it to the women in my lioness pride,” Washington says. She is celebrating women’s ability to be strong, beautiful, and nurturing during a time where the world needs effective leadership.

But did you know this isn’t Kerry Washington’s first business investment? In addition, she is an investor in The Wing, a female co-working space that celebrates the idea of inclusivity and community by supporting women’s voices and those voice of others who have been marginalized. She also invests in Community, which allows celebrities to communicate with fans via text messaging, and Byte, a direct-to-consumer teeth-straightening startup.

Kerry Washington is proving not only that she has the power to command a screen, she is ready to take over the business world. So, will you be sharing Aurate’s new jewelry line with any lionesses in your pride? Let us know down in the comments. 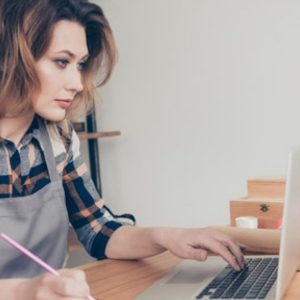 Funding for small businesses may not always be easy to attain. Here are some examples of federal funding available in...