Did you know that the United States unofficially had a woman as President? A woman who had to take charge, help make decisions, and represented the United States people in their times of need. America’s First Lady, Edith Wilson, is our unofficial, first woman President.

The First Female President of the United States

Edith Wilson, the second wife of President Woodrow Wilson, was a pillar in American democracy. President Woodrow Wilson served as our 28th President from March 4, 1913 – March 4, 1921. An exciting part about his marriage to Edith is that she was the first, First Lady to be involved in a presidency. Woodrow encouraged her to sit by him when he read important documents, some of them highly secret and connected to the war, and she was sometimes present during discussions with his advisers.

On his tour of Europe to gain popularity for the Treaty of Versailles, President Woodrow fell ill and was urged to revert to the states. As he returned home, he suffered a stroke where he became primarily disabled. Because of his declining health, President Wilson was not able to fill his duties.

Fast thinking, Edith realized that the President had to keep his position. With this in mind, she kept his illness secret from the public and made sure that he saw only his physician and a very few trusted friends. In order to hide his condition from Congress, and any other politicians that assumed what was happening, they tricked the public.

Edith and his doctor even went so far as to prop him up for photographs. During a perfunctory meeting the President held with Sen. Gilbert Hitchcock (D-Neb.) and Albert Fall (R-N.M.) on December 5, he and Edith even tried hiding the extent of his paralysis by covering his left side with a blanket. This was the most extreme length they went to in order to hide the fact that the President was not entirely healthy.

Though Edith Wilson helped her husband by taking notes, listening in on meetings, and relaying information, she never overstepped. She never signed any laws into action or tried to control the executive branch. Instead, she selected matters for her husband’s attention and let everything else go to the heads of departments or remain in abeyance. Edith never put her own opinion into the mix and keep her distance so people would not speculate.

Edith and Woodrow soon retired after his second term concluded in March of 1921. Three years later, Woodrow Wilson died, and Edith lived on. After his death, and in her later years, Edith Wilson wrote a memoir to defend the honor of her husband. In it, she recounted his presidency and the several months leading up to the end of his term.

Edith Wilson is not widely known to the public as our first unofficial woman President of the United States. She helped her husband in a time of need. Although she is not widely recognized, many outlets have covered her story and can be found through many sources. My favorite source is Drunk History, which you can watch below. Check out the story of Edith Wilson and let me know in the comments if you knew about her before!

How eBay Got Involved In Harassing Everyday Citizens 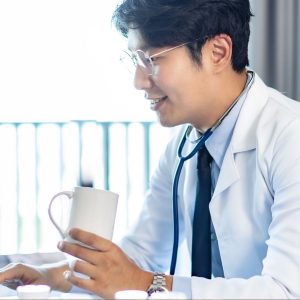 Why Social Distancing, Even From Your Doctor, Is The Future

Listen to this article now The global pandemic has been, to say the least, all-encompassing. Few are the aspects of...