Han Solo season is about to be upon us. While summer may be coming to a close, and while grocery stores are stocking up on everything Pumpkin Spice, it does not mean the rum is gone. Island imbibing is always in season, and there’s no better way to hold on to the last glimmer of summer than to sip back with a tiki drink.

Tiki drinks are a breed unto their own, usually full of vibrant flavors and about three different kinds of rum. While the Hemingway daiquiri is still my favorite rum cocktail, there is an entire world of drinks that the non-coastal Parrotheads can enjoy.

Origins of the tiki drink

First of all, what the hell is a tiki drink? As much as we would like to believe that these are indigenous concoctions passed down from generation-to-generation, most of these rum-based drinks are American inventions — and not island-based drinks, as most were made in Michigan or other landlocked states. Secondly, while ordering a fresh batch of island-inspired mugs might make one feel like they’re on vacation, plopping an umbrella in a glass does not a Tiki drink make.

This entire genre of drinks, from swizzles to daiquiris, is a reaction to soldiers coming home from World War II. Everything we associate with tiki, from Fez hats and smoking jackets to little umbrellas and palapas by the beach, or parking lots in most situations, is a fantasy. Soldiers and sailors returning from the Pacific brought back a desire to recreate the Polynesian culture. And in traditional American fashion, the market rose to meet the demand.

Much like how today’s speakeasies capitalize on people’s desire to recreate an idea, tiki bars created an aurora of mystery, intrigue, and island culture. The outpouring of cocktails that emerged from this era is a vivacious blend of balanced, fruity, complex, spirit-forward connections that still entertain the palate today.

The golden age of cocktails

In many ways, Tiki drinks are America returning to the Golden Age of Cocktails. Trader Vic’s and Don the Beachcomber lay claim to many, if not all, of the drinks on this list. If you want to delve deeper into the mythos of this artform, I recommended reading The Smuggler’s Cover, which lays out a dynamic list of cocktails and the wild and weird world of rum.

Rum is a beast unto itself. It’s almost the final frontier of alcohol if we exclude things like kratom and kava. It is as far from American whiskey as liquor can get. The age statement basically means nothing; the flavor is vastly different from brand to brand. The American palate has been blinded by Bacardi and Captain Morgan (not that there’s anything wrong with either of those two brands).

Rum is sugar. Specifically, it is sugar cane, or molasses, or a weird blend of things. Most rum is made from molasses and hails from the Caribbean. Jamaican rum is funky. Bacardi is originally from Cuba but made a getaway to the Bahamas and then Bermuda during the Revolution, region to region, and style and flavor profile changes.

The only real way to understand is to expand your palate. To explore, region to region, the differences, and nuances from one bottle to the next. And the beauty of it all? It’s all affordable.

This is not Pappy Van Winkle or a Remy Martin XO bottle, although that day is coming. Like barbeque and cheesesteaks, rum is a drink for the people. So, break out the cocktail shaker, stock the fruit juices, and whip out the Magnum P.I. Acapulco shirts, because we are bringing tiki back.

Every tiki drink is improved by two things: umbrellas and mugs. Unlike other bar fare, tiki drinks are meant to drink with the eyes first. Their colors are bright and intentionally invoke island vacation; therefore, it’s all about the presentation.

While the drinks may taste the same in any glass, it’s always fun to add the accouterments and enjoy these libations to their fullest. Splurge on some true tiki mugs like a coconut or Polynesian relic, and be sure to keep your drink cool by topping them off in the shade of a small umbrella.

Lastly, Tiki Drinks have a lot of ingredients, but the payoff is terrific. The best idea is to invest in citrus juices and bitters and build one at a time. Otherwise, you will be forking over a lot of dough on various syrups like Orgeat or Demerara and Fassionola and a myriad of other ingredients. The list below tries to keep them in the same ballpark so that you’re not chasing down elusive ingredients.

The funny thing about Mai Tai’s is they do not taste like what you think they will taste like. Both the addition of Orgeat and a Jamaican Rum turn this island drink into something much tangier. People either love or hate this drink.

It is nutty and funky, with evolution as the ice melts into the drink. This drink can get advanced and benefits from playing with different rums. Use a light rum, and the drink is dominated by the Orgeat; use sweet rum, and it drinks like syrup. The point is that this is an adaptable beverage and, like all rum-based drinks, will vary from bottle to bottle. Bacardi and Captain Morgan will lead to tame pastures, but feel free to experiment with other islands like Jamaican Rum or Havana Club.

1 oz Smith and Cross (or any Jamaican Rum)

Created at the KL Hilton’s Aviary Bar in Malaysia in 1978, Giuseppe Gonzalez popularized this drink in New York. Perhaps only the Pina Colada is more approachable when it comes to tiki because the balance of sweet fruit and bitter liqueur make this a modern classic.

While any rum will suffice for this cocktail, this is a perfect time to note rum itself. Rum is like the final frontier of liquor. It is rushing back into prominence because the market was dominated by the titans like Bacardi and Captain Morgan for so long.

Similar to how Vodka and other clear spirits nearly killed American whiskey, light rum became the molasses-based spirit’s hallmark. Then, spiced rum leaped into coke around the world because people thought rum was useless. Now, there is a resurgence among Caribbean distillers; however, they are not always the most honest about their practices.

For one, the numbers on the bottle rarely mean anything and are simply used for marketing. Newer and newer bottles will likely show up on shelves, but always do a little digging before forking over a considerable amount for rum.

Rum is extremely affordable, which makes it accessible and great for cocktails. That being said, people will try and go the same route as Vodka and jack up the price and call it Shinola. Be warned.

.75 oz of that bitter lover Campari

Mint, rum, and bittersweet flavors make the Queen’s Park Swizzle an island favorite. Akin to the mojito or the mint julep, this drink is a little less sweet and more robust. Best matched with a Demerara Rum and syrup, this drink was invented in the 1920s in a Trinidad hotel.

The choice of alcohol and sugar makes all the difference here. Go with a clear rum, and you may confuse the concoction with a bitter mojito. Find a decent gold rum or something funky, and the drink truly shines with the bitters.

The world of cocktails owes a lot to the House of Angostura. While the company makes many things today, they are most known for bartender’s seasoning, Angostura Bitters. In 1824 in Angostura, Venezuela, Dr. J.G.B. Siegart perfected his medicinal, aromatic bitter Amargo Aromatica. The drinking world would never be the same. Like most bitters, the idea started off as an ailment cure for everything from an upset stomach (still works) to a myriad of ailments; however, much like the addition of rum to water for preservation gave way to some of the tastiest drinks ever invented, bitters moved quickly from a cureall to catchall.

Lastly, a swizzle is called a swizzle because of the swizzle stick. You don’t need to have one to make this drink, a spoon or shaker will suffice, but that’s where the name comes from. Below, we will shake. But, if you want to swizzle, swizzle away, my friend.

Mint, a lot of it

2 dashes (what the hell is a dash) Angostura Bitters

While not technically a tiki, you would be hard-pressed to convince people that this is not a dink straight from the Caribbean. All the flavors are present and combine into a delicious, extremely drinkable cocktail.

There is nothing fancy here. This is the sort of drink anyone can enjoy. Take out the booze and share it with the kids, similar to a Shirley Temple. But kick it up a notch with a rum of your choice, and this simple cocktail does wonders seaside (or porch side for backyard lawns).

Rum, banana, pineapple juice, orange juice, and grenadine make up this classic. Make sure to pour the grenadine over the back of a spoon to get the color effect; without it, it becomes a red mess and loses some of its appeals. Otherwise, plan to make a dozen of these things and forget what beach you’re at (or not at).

The Painkiller is so named by the Soggy Dollar Bar (the perfectly named bar because you have to wade out into the ocean to go to the bar, hence getting your money wet) because it can be made for the amount of pain you are in. Additionally, it is one of two cocktails to actually be patented. So, for those of you who like to break the law as you drink, this is for you.

Technically speaking, a painkiller is:

The above is the officially licensed Painkiller by Pusser; however, you will be hard-pressed to find anyone who actually makes it this way. This one also is a dealer’s choice sort of cocktail, since it is supposed to be adapted to the drinker. Home bartenders can sub in whatever rum they wish, and the pros have even been known to sub in Bacardi 151 and add a float of Myer’s Rum.

It has been described as the drinker’s Pina Colada, but both are incredible drinks. The Pina Colada is light on the booze and heavy on the cream meant to dazzle the taste buds and lead to brain freeze. The Painkiller is more about harnessing those island flavors into a potent potion.

Rum carries a story, a beautiful mix of culture and histories. What makes these drinks great is not only what is in the glass, but how it got there. Don the Beachcomber, Trader Vic, House of Angostura, the Soggy Dollar Bar, the Queen’s Park Hotel, as well as the Caribbean, Spain, America, England, and glass after glass from bartender to drink has led to the mug in your hand. Cheers and drink responsibly.

What’s your favorite rum drink? Let us know in the comments!

Brock D. Vickers is a writer, actor, and athlete with more than a decade of experience in the entertainment industry both backstage and in front of the camera. In addition to working as an actor and writer, Brock has served as a marketing manager, a journalist, a ghostwriter for the self-help industry, and an on-camera host for various travel shows as well as a bartender and brand specialist for companies such as Glenlivet and Hendricks to Vital Proteins and Four Sigmatic. Every artist is an entrepreneur. From the stories they select and the narrative they craft to their branding and social media use, artists learn quickly the grit required not only to survive but thrive. 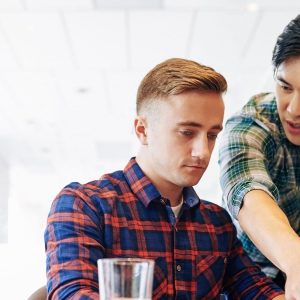 7 Common Traps Entrepreneurs Need To Avoid At All Costs

Listen to this article now The headline says it all, but though and still, entrepreneurs will fall into these common...