According to data released on Monday by real estate firm Redfin, decades of high inflation are causing many prospective homebuyers to consider relocating to cities deemed more affordable.

Rising mortgage rates have stifled housing demand in the United States. However, among those still looking to buy a home in the third quarter, a record 24.2% were looking in a different metro area.

According to Redfin data, the most popular destination for potential movers was Sacramento, California. Miami was ranked second, followed by Las Vegas. Nine of the top ten most popular metro markets had a lower median home price than the city of origin for homebuyers.

“With a recession on the horizon and household expenses at an all-time high, many people can’t afford to buy a home in an expensive area and/or want to save money in case of an emergency, making relocating somewhere more affordable an appealing option,” said Redfin Economics Research Lead Chen Zhao.

In September, inflation reached 8.2%, far exceeding the Federal Reserve’s 2% target. In an effort to bring prices down, the Fed has implemented a series of sharp interest rate hikes, causing a continuing correction in the housing market.

According to Redfin, the median home sale price in Sacramento is $560,000, which is roughly one-third the $1.5 million price tag of homes in San Francisco, the top origin city for its homebuyers.

Redfin’s data also revealed an ongoing trend of homeowners looking to leave major cities, where inflation has increased the steep cost of living and added to residents’ financial pain.

According to the firm, homeowners were looking to leave San Francisco, Los Angeles, and New York more than any other city during the third quarter.

Redfin’s analysis was based on approximately two million online users who viewed home listings in over 100 metro areas over a three-month period. Viewers were considered potential movers if they looked at at least ten home listings, at least one of which was located outside their current city.

In many markets, home values are already falling as sellers adjust their asking prices to account for higher mortgage rates. The average 30-year fixed-rate mortgage surpassed 7% last week, forcing many buyers to wait until conditions improve.

The pace of relocations, even to more affordable destinations, is expected to slow as the housing market cools.

“Migration will likely slow in the coming months as the labor market softens and job losses encourage more people to stay put or move in with family, though some may need to relocate for new employment opportunities.” Furthermore, many remote workers who wanted to relocate have already done so,” Zhao added.

What do you think of that situation with relocating to more affordable cities? Please let us know in the comments.

China iPhone workers scale fences and flee factory after it is locked down due to strict COVID policy. 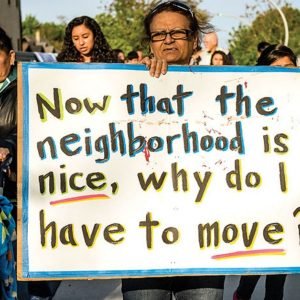 Why Gentrification Doesn't Always Have To Be A Bad Thing

What are the pros of gentrification? It can be a great thing as long as the goal is to renovate,...