The founding of FIFA can really be attributed to one man. Maurice Robert saw a need and how best to satisfy this need back when the only two teams playing in the serious competition were England and Scotland in 1872, 32 years before the historic meeting where Robert brought all football nations to the table to create a unified system of rules for play.

The Birth of FIFA

Before FIFA was even a notion, Football (soccer) was governed largely by the Football Association. But this body was limited and only ruled over football in the UK. After the second major match between England and Scotland, where England trounced the Scots 4-2, a second governing body was born in the Scottish Football Association. Still, they only held sway over UK football interests.

As often happen in high-energy sporting events, the excitement and pageantry of football spread like wildfire to greater landscapes within the UK, and even beyond to neighboring nations, and with this, the governing body of the Scottish and original Football associations became quickly overwhelmed and a new system had to be formed to compensate, lest the players and fans are trampled by the influx of new interest.

The British influence attempted to keep the football governing under their sway but was unanimously voted down, leaving a vacuum that had to be filled quickly. The nations of Europe not wishing to be under a football dictatorship conceded to create their own football governing body. So, in Paris in May of 1904, FIFA was voted into existence.

The founding countries are France, Belgium, Spain, Netherlands, Denmark, Sweden, and Switzerland. Germany also threw their hat into the ring to vote for this new governing interest in football and cast its ballot via telegram. But, since they weren’t there with a delegate in person, they do not carry the mantle of a founding country for the organization.

The formally written enactment of the governing body of FIFA became effective in September 1905. In these, FIFA could make specific rules that all members had to abide by, lest they be unable to contribute within the organizational structure of FIFA. Maurice Robert, who at that time went by the name Robert Guerin, was named president and enforced these statutes with absolute determination.

The primary statutes are:

The Early Days of Tournament Play

The competition was tricky, especially without England as a part of FIFA at the beginning of the organization. The absence of the UK countries created a void in the tournament community, and it wasn’t until they joined FIFA in 1905 that competitive play took off. It was negotiated by Baron Edouard de Laveleye who became the first honorary member of FIFA, largely for his contribution to the sport.

FIFA’s influence reached beyond the borders of Europe and in 1909., South Africa joined the ranks, followed by Argentina and Chile in 1912. The US and Canada followed suit in 1913 just before the start of World War 1. And all of these countries, plus countless more, are still dedicated members of FIFA to this day.

The FIFA vice president, a man named Carl Anton Wilhelm Hirschmann, kept it going strong even despite the conflict of WW1. He convened an assembly in Brussels in 1919 after Britain withdrew from FIFA in protest of allowing Axis powers to continue their membership. They rejoined but left again under a different grievance, only to return at the end of WW2.

The Lessons of FIFA

FIFA was designed for one ultimate purpose. Beyond governing the competitive football world, it brought together nations under one banner. It started a friendly dialogue between countries that knew little about each other and even some that had once been enemies and engaged in devastating conflicts, such as World War 1.

FIFA also gave the football world rules to guide their competitive style so that a uniform system could always be in place when it seemed like everything was in upheaval. It allowed a consistency that became a comfort to those who desperately needed it and a routine to those who had been failing in the execution of crafting a viable tournament structure.

And it held everyone to the same standards of ethics, sportsmanship, and fair play. When the elected president of FIFA, Gianni Infantino levied corruption allegations against numerous FIFA officials, which led to the former president being banned for ethics violations, it told the sports world that no one was above the law, and FIFA believed that as a defining principle with absolute resolve.

The biggest takeaway here is that no matter who you are, no matter what you contribute, everyone under the flag of any governing body, be it a sports federation, a country, or even a corporation, the standards must apply to all evenly, equally, and unwaveringly. Otherwise, the entire system crumbles on a foundation of shifting sand.

FIFA and the Darkest Days

The inspiration to begin the organized football federation was to unite all countries under one common love, one banner of brotherly competition, and one perfect system of rules that would keep the sport pure. But that was not always how things went. As with all endeavors, money corrupted this once glorious game and turned it into a money-making giant that almost destroyed it forever.

It sounds hyperbolic, but true football fans remember the World Cup in Argentina where rumors of corrupt officials, bribery, and even throwing matches were found to be absolutely the truth. And it all started with a notion that FIFA could be an incredible cash cow if the sport made a couple of specific changes.

For one, sponsorship was added and one of the primary investors, Coca-Cola, is still in the circle of stakeholders to this day. And then there was the president of Argentina who was more of a dictator than a benevolent leader, punishing dissidents and imprisoning anyone who spoke out about the corruption he had initiated to make Argentina the setting for the world cup that year.

It all came back to a capitalist view of the sport. If a buck can be made, someone will figure out how to do it in a shady fashion. The unkindest cut of all was when the FIFA president stood beside the Argentinian dictator and witnessed the sport he was elected to defend dragged into the depths of the dictator’s depravity.

FIFA and The Sportsbook

With sports, gambling is commonplace, but no sport has such an incredibly violent history as football. Fans of organized football have been known to kill players who perform poorly, often as a response to losing lots of money on the matches.

In one case, a player from Columbia scored on his own goal, resulting in a loss. A few days later, he was confronted and shot 6 times by the bodyguard of a pair of powerful druglords who had lost a mint on his failure. In others, fans have thrown items intending to maim and kill players they deemed unworthy to wear the colors of their nation after a loss.

FIFA did nothing in response to this violence. They didn’t speak out against the tragedy, set up security for prominent team members when they had viable threats, and seemed to care very little about the players as long as the money was rolling in.

Can FIFA be saved?

The short answer is, it can. And it is well on its way to being a pure sporting business in the most widely loved sport in the world. There are more nations in FIFA’s membership than there are in the UN. And all of these countries want the sport to remain clean and fair. New leadership has been elected to start the transition back to its glorious past.

But it will take more than that. It will take everyone working together. Football fans are hardcore. But they need to remember that at the end of the day, the players are just playing a game. It isn’t life and death. If you gamble and lose, it was your choice to make the bet. As long as players are treated with dignity and respect, and the corrupt history is learned from and valued as a way not to run the sport, FIFA will return to its former glory.

Why Focusing on Training Your Staff is Important 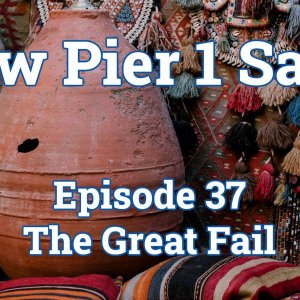 In its heyday, Pier 1 Imports had 18,000 employees and over 1,000 stores worldwide, bringing us the most eclectic and...