Henry Ford’s story is the classic portrayal of the American Dream. Nothing to Everything. He was a patriot; we see his love of America through his life and the legacy his company has continued to fulfill, even if that legacy is imperfect. Many know of his creation of Ford Automobile, his creation of the assembly line, and his ability to make driving more affordable. But what of Henry Ford, the man?

The Life of Henry Ford

Henry Ford was born in Springwells Township, Michigan in July of 1863. He was the first of six children born to Irish-born William Ford and his wife Mary. Being born to an immigrant parent who had to work his way up in his attempt to achieve the American Dream, Ford learned the value of hard work from a young age.

This manifested through his love for mechanics. By age 12, he spent most of his time in a machine shop that he had made and stocked himself. By 15, he constructed the first steam engine. From his knowledge, he was able to became a machinist’s apprentice in Detroit. Working under the machinists at James F. Flower and Brothers, as well as the Detroit Dry Dock Company, Ford finished his apprenticeship in 1882. With new found knowledge and skills, Ford set out to make his mark on the world.

By July of 1891, Henry Ford had worked his way up. He was employed by Edison Illuminating Company of Detroit, becoming chief engineer in 1893. Because of his employment there, he and Thomas Edison became lifelong friends. However, in 1899, Ford resigned from Edison’s company. He formed the Detroit Automobile Company alongside others who shared his love for mechanics. Unfortunately, within 18 months, the company had gone bankrupt. This left him open to form the Henry Ford Company two years later, in 1901. He eventually left this company as well. All the while, Ford was creating some of the fastest race cars of the time. In 1903, Henry, along with 12 other investors finally created the Ford Motor Company. By 1906, he became the company’s president and controlling owner. Finally, he became the sole owner in 1919. He remained president on and off until he died.

At Ford Motor Company, Henry used his love of mechanics to change the way we looked at automobiles. He even changed the way we looked at the world. He revolutionized the automobile by making it affordable to all. This was largely achieved by his creation of the first assembly line system. This system created more jobs, lowered the prices of cars, and made many industries who adapted his technique more efficient. Through Ford, workers could now afford to drive to work in their newly created jobs!

For these works, along with many others, Henry was lauded in 1946 at the Automotive Golden Jubilee for his contributions to the automobile industry. Later that same year, he received his first gold metal by the American Petroleum Institute for outstanding contributions to the welfare of humanity. The US government also honored him as a part of their Prominent American series in 1965. Similarly, by 1999, Fortune magazine had named Henry the Business Man of the Century. He received many more awards for his work over the course of his life, so this is by no means an exhaustive list. However, most people can tell you this part of his story. I want to know more about how the man spent his time outside of the office.

Ford Outside The Company

Outside of his career manufacturing cars, Henry Ford spent his time writing and giving back to his community. His books include My Life and Work (with Samual Crowther), Today and Tomorrow, Moving Forward, and Edison, as I Know Him (also with Crowther). These books describe his life, his rise to fortune, his friendship with Edison, and his industrial and social theories. From these philosophies, we have termed “Fordism” which is used in social, economic, and management theory about production. This theory describes the ideology of advanced capitalism centered around the American socioeconomic systems in place in the post-war economic boom.

His social theory also led Henry Ford to partake in many philanthropic endeavors. Having been raised with little money may help explain his charitable ways. In an average year, Ford gave away roughly one-third of his income to those in need. One example of this is when Ford gave $200 to a couple who he met on a side of the road to fix their farmhouse, which had been destroyed in a storm.

He put a great value on giving money directly to the people who needed it, instead of through charities. However, he also launched his own philanthropic projects. Some examples include Valley Farm, a farm for orphaned boys; Oughtrington Hall which housed Belgian refugees in WW1; and the Henry Ford Hospital in Detroit, which is still one of Detroit’s largest hospitals. This is by no means an exhaustive list, either. Instead, it is barely the beginning of all Ford gave back to those around him.

Though Ford received many awards, commendations, and gave back to his community, Ford was nowhere near perfect. In addition to all these great feats, he was also given the Grand Cross of the Supreme Order of the German Eagle from Nazi Germany and was highly revered by Hitler for his anti-Semitic views. Like all entrepreneurs, he had faults. Big ones. My hope was to capture what he did as an entrepreneur and his beliefs played a large role in how he ran his business. It is important to remember the full man; acknowledging both the good and the bad.

Throughout his life (which was a rather long one for those times, as he died at 83), Henry Ford gave back to the community around him. His was a classic realization of the American dream, going from nothing to one of the biggest automobile distributors of all time. He gave hope to those wanting to achieve something great. And he gave back to those around him, because he could. Henry Ford changed the world through his revolutionization of the mechanics industry, his heart, and his love of giving back. Though he was not perfect, he remains an influential entrepreneur in American history. 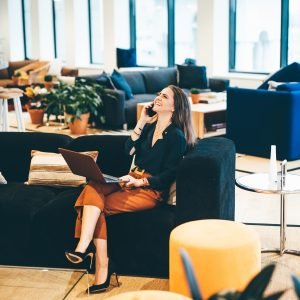 Listen to this article now Finding time to focus on your health and well-being can be tough as an entrepreneur....