Expensive cars, awesome gadgets, and stunning women. We could go on about what makes the Bond films so spectacular. Instead, we’re focusing on the evolution of James Bond’s style and what makes him the paradigm of masculinity.

When James Bond debuted in Ian Fleming’s 1953 novel Casino Royale, the debonair spy with a license to kill became a cultural phenomenon. Described as having “dark, rather cruel good looks”, Fleming’s character was cold, mysterious, and a ruthless playboy. Bond came to the silver screen in 1962 and has been portrayed by six different actors in twenty-four films (excluding the controversial remake Never Say Never Again). With over 50 years on screen, James Bond’s style has evolved thanks to his various tailors.

No other character is as synonymous with tuxedos as Bond. The first time we are ever introduced to Bond in Dr. No, he is playing poker in a shawl collar tuxedo with silk trim and a diamond bow tie. Anthony Sinclair was the English tailor behind the Sean Connery era. Sinclair created the Conduit Cut, which is a pared-down jacket with a slim waist and flared bottom. This simple and comfortable suit with double vents was perfect for a man who needed to look his best and also be ready for action at any given moment.

Sinclair designed so many dashing suits for Connery during his six films that we can’t get to them all. Who can forget this iconic scene from Goldfinger? After diving underwater to place bombs in a drug plant, Bond strips off his scuba gear to reveal a perfectly dry white suit underneath. He completed the look with a bright red carnation on his lapel and casually walked into a lounge seconds before the bombs went off. Classic Bond.

In 1969, Connery stepped down from the role of Bond and George Lazenby came in for one film in On Her Majesty’s Secret Service. He had big shoes to fill and most still argue he couldn’t hold a candle to Connery. Regardless, the man looked the part. The suit above was one designed by Anthony Sinclair used solely for the photoshoot.

Dimi Major was the tailor for the sixth film in the series. He designed much slimmer suits for Lazenby with closer fitting waists. He also introduced Bond to three-button suits with natural sleeve heads blending seamlessly into the shoulders. However, the most remarkable suit in the film is this navy blue double-breasted jacket. It has six silver buttons along the front and is paired with a red silk tie. This suit resembles the uniforms worn by the British Royal Navy, perfect for the man serving Her Majesty the Queen.

Having appeared as Bond in seven films with three different tailors, Roger Moore has a massive collection in his catalog. Leisure suits came into popularity in Britain during the 60s. They were the casual option for people who hated formality. With Live and Let Die released in 1973, Bond was not one to escape this fad. Designed by Cyril Castle, the powder blue color and flared bottoms in the picture above are components of the mod era. Moore wears his jacket loosely with rolled up sleeves, a white belt, and a sleeveless undershirt.

Keeping in line with colored suits of the 70s, Angelo Roma designed this tweed suit featured in Moonraker. The light brown material has a mauve tint to it and brown suede patches on the elbows. The jacket is warm and flexible, making it a practical choice for Bond to practice his shooting skills on the sniper lurking in the trees above.

Although Douglas Hayward was the tailor for Octopussy, shirtmaker Frank Foster is reported to have designed this safari shirt. It’s a neat piece with four pockets along the front and two shoulder straps. When paired with tan pants, it’s also known as a safari suit. The open weave wool keeps Bond cool while roaming around an Indian palace. Frank Foster’s shirts have appeared in the Bond series as early as Dr. No.

In 1987, we were introduced to a younger Bond in Timothy Dalton donning a black leather jacket. Benjamin Simon was the tailor for The Living Daylights, but this jacket was designed by Kenzo. It’s congruent with the 80s style, having broad droopy shoulders and cuffs covering half the hand. Bond pairs it with a dark gray wool sweater and charcoal flannel pants to keep him warm on his trip to Austria.

You can’t discuss 80s fashion without touching on padded shoulders. Stefano Ricci designed this suit for License to Kill which looks a tad too large on Dalton. It has longer than normal sleeves and fits loosely on his body. Bond also wears a white tuxedo shirt with bibs on the front and a black cummerbund along the waist. The look wasn’t the most flattering, even on Bond, but you can’t blame Ricci for keeping up with the style of the time.

After the colorful suits of previous decades, Italian menswear brand Brioni supplied all the suits for the Pierce Brosnan era. In 1995, Goldeneye director Martin Campbell chose to return to rich, darker colors as evidenced by this sleek navy blue overcoat. The sides are long and loose without appearing too bulky. It’s paired with a charcoal suit and leather gloves, making Bond appear fashionable and warm in the chilly Russian climate.

There’s no denying Brosnan looks fantastic in a tuxedo. In Die Another Day, Bond attends a black tie event at an ice palace wearing a blue-dialed Omega Seamaster steel watch. Ian Fleming first described Bond’s preference for wearing Rolexes in On Her Majesty’s Secret Service and that is what the films depicted until Brosnan switched to Omega. There’s even a quick joke about this switch made between Daniel Craig and Eva Green in Casino Royale.

Craig was only 37 at the time of his casting, making him the youngest and roughest Bond we had ever seen. His dirty blond hair and blue eyes caused controversy among longtime Bond fanatics, but he managed to blow everyone away with his astonishing performance. Brioni continued to tailor Bond’s suits for Casino Royale, but when Tom Ford took over in Quantum of Solace, he designed some amazing suits for Craig. This unforgettable dinner jacket from Skyfall in the photo above sparked a midnight blue suit trend among men scrambling to capture Bond’s look.

Craig has an impressive physique and the filmmakers aren’t afraid to show it. The O’Connor suit from Spectre was created specifically for Daniel Craig by Tom Ford and is now a major part of their collection. The navy blue sharkskin jacket has a tight waist, shorter length, and somewhat of a sheen thanks to the light and dark interwoven fabrics. This form-fitting look has brought Bond a long way from the classic styles of his predecessors.

Daniel Craig has stated the next Bond film will be his last, eventually leaving the filmmakers in search of new blood to carry on the series. One thing we know for certain is that James Bond will continue to inspire new generations of men in the years to come. With No Time To Die on the way in April 2021, we can’t wait to see how the character evolves next. 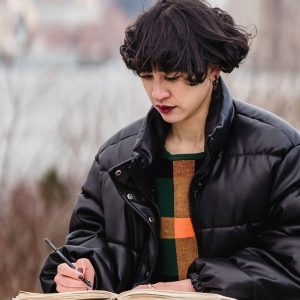 How You Can Use Writing To Quiet Those Negative Thoughts

Writing has always been a therapeutic method. Free writing is the process of writing where you write what comes to...