*UPDATE: After being closed for three months due to COVID-19, the Airborne Museum (in Normandy, France where the Walkway To Victory is located) will reopen on June 6th (the 76th anniversary of D-Day); The Reagan Legacy Foundation looks forward to laying 300+ commemorative bricks to add to the already expansive walkway.

When I think about what those soldiers endured wading through water on the beaches of Normandy June 6, 1944, I wonder if I would have had the courage to push forward. The cold, the redness, the gunfire as bombers soared overhead—these are all real experiences from the soldiers who were there on D-Day. And now, thanks to Michael Reagan and The Reagan Legacy Foundation, their memories will live on forever in a new memorial.

The Reagan Legacy Foundation was founded in the early 2000s after Michael Reagan and his sister wanted to find a way to honor the life of their father, former President Ronald Reagan. When he traveled to other countries, Michael was surprised to learn there was no mention of his father in places where he had huge impacts, such as Normandy and Berlin. Therefore, it was important to him that the world remember Reagan’s many accomplishments.

According to Michael, running a charity is never easy. As admirable as someone’s intentions may be, Michael stresses the most crucial part about running a non-profit organization is to find the right cause, select the right people, and never treat it as a means to make a living. Because they are not a large organization, The Reagan Legacy Foundation picks and chooses which projects they believe to be most important. Their latest project is the Walkway to Victory, a memorial dedicated to the soldiers who fought on D-Day.

There’s no denying D-Day was the day that changed the world. Because the Normandy Invasion was successful, Allied forces were able to secure a foothold in France, which led to the liberation of regimes under Axis control. This operation cut down the length of WWII significantly. As Michael states, “there was only one D-Day and it needs to be remembered.” Had the Allies not been victorious on that first day, the outcome of the war would have been vastly different.

Ronald Reagan, who also served in WWII, was the first U.S. president to speak at Normandy following the war. When Michael attended the 70th anniversary of D-Day, he began to wonder what he could do to honor his father and other veterans. He developed the idea to connect the four buildings of the Airborne Museum in Sainte-Mère-Èglise, France with a walkway. Each brick in the walkway is engraved with the name of a veteran who served during WWII. The Walkway to Victory project began underway last year and is continuing with quarterly installations.

In honor of the 75th anniversary of D-Day, The Reagan Legacy Foundation has decided to raise money to send a U.S. veteran to visit the memorial. Out of the estimated 389,292 WWII veterans still alive today, many of them are now in their late 90s. Michael considers it more of a blessing to be able to see someone who served visit the walkway rather than attend himself. The Reagan Legacy Foundation is working with Diane Hight of Forever Young Senior Veterans to select the right candidate to make the trip.

“Every One of Those Bricks Has a Memory”

Though war is never an easy solution, Michael believes that soldiers are true heroes. Indeed, there is a price for freedom and what the men and women accomplished on D-Day is an important lesson that needs to be taught. If we don’t remember our mistakes, we will repeat them. Visiting the walkway and physically seeing the names on the streets is a profound experience and, as Michael states, “Every one of those bricks has a memory.”

The Walkway to Victory is an incredible tribute to the men and women who helped change the world. If ever given the chance, be sure to visit the names in Normandy and think of their stories.

If you would like to have a veteran’s name featured on the Walkway to Victory, please visit The Reagan Legacy Foundation. All money funded from the project goes to raise scholarships for the men and women serving on the U.S.S. Reagan.

What are your thoughts on the Walkway to Victory? Let us know in the comments down below.

The Hands-On Future That Could End Alzheimer’s 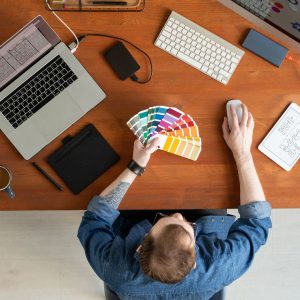 Listen to this article now Startups are often looking to make their mark on the world and stand out from...