The ways in which Google has influence in our daily lives cannot be underestimated. Google is no longer just a search engine. To name a few, Google Maps, Google Hangouts, Google Calendar, YouTube, Gmail, Google Chrome, Android, Chrome Books, Nest and Google Wallet are platforms that Google has expanded their business onto. There is really no corner of the internet, or our lives, that Google does not influence in some sort of way. Google has access to personal pictures, documents, contacts, messages, data, location and information. It is essentially impossible to escape Google.

The Department of Justice sees a problem with this. They simplify it by filing a lawsuit against Google Search specifically. Above all, they argue that Google Search has a monopoly and is anti-competitive due to their extensive deals with brands like Apple and phone carriers. This argument is based in that other browsers and search engines do not stand a chance against Google. Therefore, the antitrust lawsuit can be harmful for Google, especially when trying to make new business deals. However, they have a lot of money. Google pays Apple an annual $8 million dollars to be the default search engine on the iPhone. They are able to outbid any company that tries to compete.

Suppose that the DOJ wins their case; it is hard to say if the average consumer would be happy with brands making deals with other search engines. Most consumers have gotten used to and prefer Google over the past 20 years. They rely on the platform heavily in all aspects of their lives. Even in the contested debate of Android versus iPhone, both deal with Google. While Google might have a monopoly, it might be one that is here to stay.

Would you be okay with tossing out Google for something else? Let us know in the comments.

If You’re Looking For A Paradise Island While Working Remotely, This Is It

Top 5 Teen Entrepreneurs To Watch Out For In California 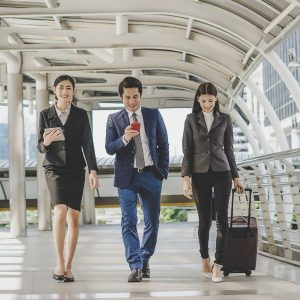 How To Plan the Perfect Business Trips

Listen to this article now Business trips can be difficult to navigate, quite literally. They require a lot of forward...