An Excerpt from the Professional Bio states,  “McCormack Lyons is a persistent advocate and catalyst for empowering women and changing how women are portrayed and perceived in the media.

In 2005, Yvonne founded The Women’s International Film & Arts Festival (WIFF) with the mission to empower women’s visions and voices; to create a safe venue for women to screen, promote and market their films; and to address issues that impact women globally while celebrating women’s accomplishments.

The next stage of McCormack-Lyons’ journey is to solidify the power of her influence in the culture-defining multimedia creative and entertainment content storytelling industry. McCormack-Lyons is doing so by having launched “WIFF TV”, a Feature Film, Documentary + TV programming Live + On Demand streaming service. She, of course, is doing so with a laser focus on women creators, as well as positive and progressive women’s subject matter.

Yvonne is often asked to speak around the world including Cartagena, Colombia; Liverpool, England; Toronto, Canada; and throughout the US regarding women in film, women in entertainment and media, and women in business.” As a result, she has consulted on the production of Women oriented film festivals in Colombia and other destinations.

McCormack-Lyons is working to produce the first post-pandemic shut-down relaunch of the Women’s International Film Festival, in Manhattan, New York, NY, March 22-23, 2023. Those dates will put the production of WIFF during International Women’s + Women’s History Month; during which time WIFF should be showcased. It will be produced for the first time as a Live In-Person + Hybrid Event, being streamed live and on-demand on WIFF-TV.

The next iteration of the Women’s International Film Festival in NYC will focus on what is most likely its most important mission, which is to create buzz about women created and subject matter in film and TV content. The objective is to create that buzz with the influencers, decision-makers, financiers, distributors, networks; and of course, the consumer influencers.

The call is out for you to get involved, with the 2023 Women’s International Film Festival whether you are a novice or high-powered entertainment industry executive, a new or firmly established content creator, a media industry influencer, or a wannabe in any of those categories, Women’s International Film Festival can be your gateway to your next big thing.

I do not want to forget the fans or potential fans of women-owned films or women’s subject matter entertainment, participate in person at the live event, stream live on WIFF TV or on Demand on WIFF TV; because it will be great entertainment.

As you might have noticed in captions on some of the images, there will be what you’d expect of tier one level film festival production; including full-length feature films, documentaries, short, narratives, foreign films +  musicals. There will be special programming, panel discussions with Women film creators, actors, film + TV industry executives, Media mavens and so much more.

Yes, there will be special events, to promote meaningful networking through social engagement, introductions and serendipitous encounters. One of the most sought-after events will be the awards event on Saturday night, which will honor the films and other content projects voted the best by participating entertainment industry executives + mavens.

Yvonne McCormack-Lyons is a Dream Weaver, who can help you manifest your creative storytelling visions into monetizable Theatrical Feature Film, TV, and On-Line Content!!!

For Participation Options + Opportunities including film submission; which is currently open and for Press/Media Contacts + Partnership, email press@womensfilmfest.com 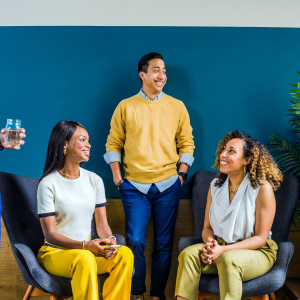 5 Tips For Dressing In The Workplace

The days of dressing in formal suits and tailored dresses with high heels to the office are over. Fewer and...