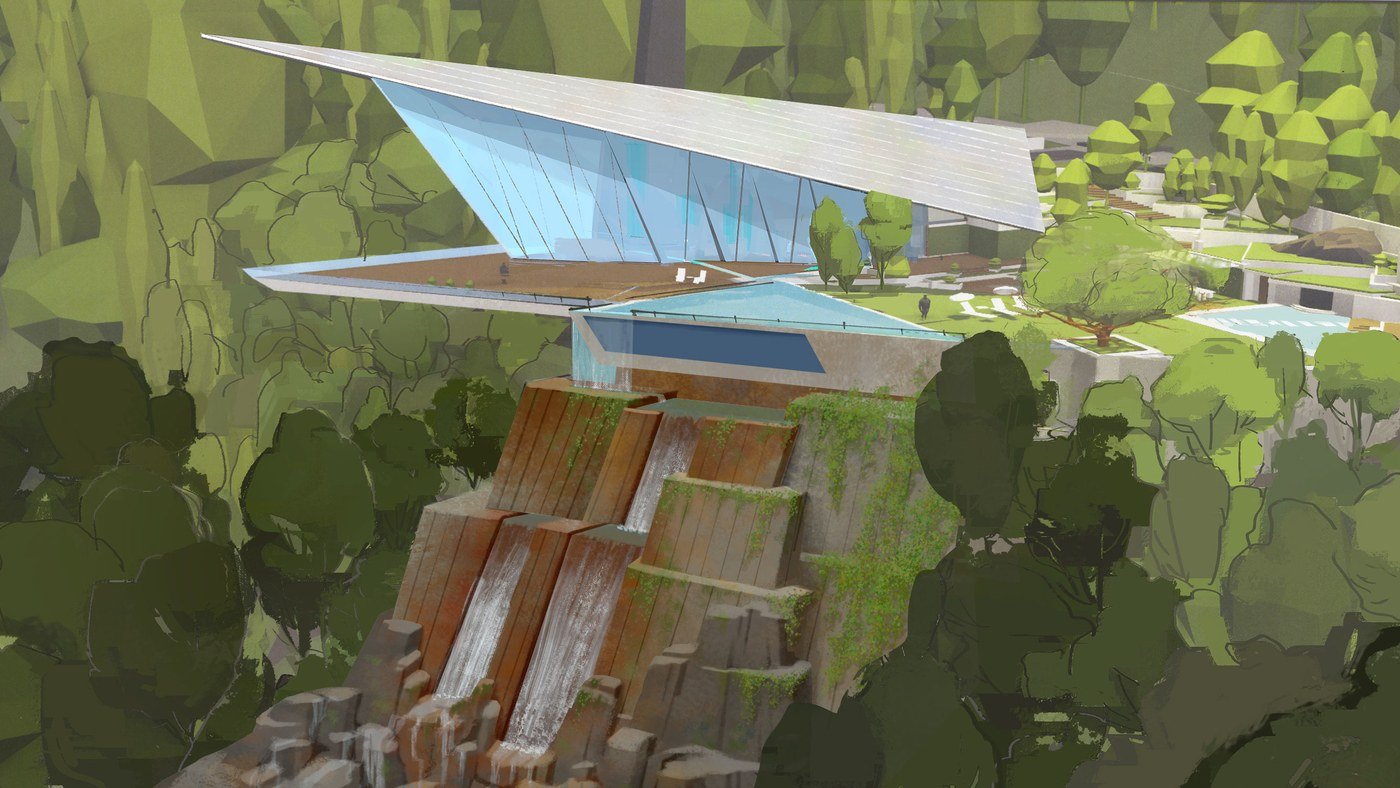 Incredibles 2 was a hit with both audiences and critics for many reasons. While its’ realistic family drama, thrilling action sequences, and excellent voice acting certainly make the movie resonate, I walked out of the theater daydreaming about the house. It’s midcentury modern, it’s placed on a precipice, and it’s a designer’s dream. Let’s take a closer look at this masterpiece in production design.

“It’s fun to look at architecture, and it’s part of what I do. All of our films require different worlds. I really delved into architecture on this film in particular.”

It’s not surprising to hear this. The house looks like something Walter Gropius or Philip Johnson would happily dream of. Eggleston himself referenced the James Evans House in Connecticut and the home in the 1968 film, The Party, as sources of inspiration.

When examining the James Evans house you can see where Eggleston took notes. The roof looks as though its made of two angled triangles rising in opposite directions, which doesn’t differ that much from the Parr family’s new residence. The Evans House also has multiple floor-to-ceiling windows that usher in plenty of natural light. The Incredibles home also utilizes expansive windows as well as other elements to bring nature inside.

One of the ways the production design draws nature indoors is through the use of materials from the surrounding landscape. The rock formations mesh with the constructed walls of the interior and even serve functions (the one on the far left is actually a fireplace). The trees and other lush flora are placed either against walls or in neat lines to create the illusion of partitions in the space. The floor even opens up to display pools of water! According to Eggleston, the water is a reference to the waterfall outside the residence:

“There is a waterfall behind the house, and it travels through a lot of the rooms in the house, and the water continues down beneath the house and runs down the stream towards Metroville”

While the design of the home is magnificent, it slowly becomes clear that it’s not suited for a family. Since it’s on loan to them from a CEO, the home is likely designed for the needs of a single rich gentleman. The staircases don’t have railings, the kid’s bedrooms have fireplaces, and both the indoor and outdoor pools aren’t gated. These would all be considered dealbreakers in a family home today. This may be why some of the more intimate scenes take place in the kitchen or bedrooms. It makes sense the family would gravitate towards the spaces that seem to fit them. Eggleston even says:

“The kitchen, family room, and bedrooms are human-scaled rooms. The rest of the house is big and a little frightening for the family. And, they talk about that in the film. They say it’s too much for them.”

When the film does have a caring family moment in one of the bigger rooms, the viewer sees the visual dichotomy. The Parr family is close-knit and the drama of the movie really stems from their relationships with each other. In the film, they are in a bigger situation than their used to, doing their best to represent supers and change unjust laws. Public relations isn’t their wheelhouse and the family has to make personal sacrifices for the greater good (Helen has to leave and spend less time at home, Bob has to give up hero work to be a stay-at-home parent, etc.). They’re a family trying to stay together in a situation that wants to pull them apart. This dilemma is reflected in the home as well, while the house’s design encourages the resident to wander, the family wants to stick with eachother instead.

The home does have some perks for the family of supers though. From secret elevators to intercom systems, there’s plenty of cool to be excited about.

“At the time, not many homes had PA systems. It also has a lot of private entrances and exits. A fireplace opens and reveals an elevator down to a secret garage where Helen gets her Elasticycle. There are lots of little things like that.”

So you can appreciate the design and work that went into the creation of this midcentury masterpiece, here are a few more images of the Parr’s new house:

We hope you’ve come to appreciate the level of artistry and storytelling that goes into the production design for a movie like this. There’s always something interesting going on in the background of a good film. Whether its exceptional set design or hidden motifs, we encourage you to examine your favorite films a little closer!

Would you want to live in this house? Did we miss anything? Is there another movie you want us to check out next? Let us know in the comments below or on social media!

The Style of North By Northwest

With lockdowns lifting in relation to the COVID-19 pandemic, people are more eager than ever to explore the world outside...