Miles Morales in Spiderman into the Spiderverse

Last week witnessed the release of Spider-Man into the Spider-Verse to the absolute joy of comic book lovers everywhere. The Ultimate Comics Spider-Man series was hugely popular and brought a much-needed breath of fresh air to Marvel in terms of both diversity and concept. But does this movie have enough for the average person on the street? Can the non-superfan really enjoy it? The answer is an unequivocal yes.

With voice talent coming from heavy hitters like Chris Pine (Star Trek, Hell or High Water, and Wonder Woman), Nicolas Cage (Adaptation, Face/Off , and National Treasure), Mahershala Ali (Moonlight and House of Cards), Hailee Steinfeld (True Grit and The Edge of Seventeen), John Mulaney (Kid Gorgeous at Radio City, Saturday Night Live, and  Oh, Hello), and Shameik Moore (The Get Down) it’s hard to go wrong. Please note, these are only a fraction of the downright awesome voice actors for this movie.

Spider-Man into the Spider-Verse follows Miles Morales, a smart kid from Brooklyn, as he accidentally gains the same powers as Spider-Man. Miles doesn’t have much time to really dwell on this as alternate realities start clashing and new spider people (and animals) enter his world. Miles has to learn how to use his newfound abilities and find a way to get his new friends home.

Keep in mind that this is just the bare bones of the movie. You’ll find yourself really relating to both the heroes and villains which is a feat not every film can manage. With excellent writing, voice work, and animation it’s not hard to see this movie becoming a hit. Overall the movie shows us a unique origin for a great character while introducing a cavalcade of complex friends and enemies.

With such a large cast of characters, the laws of probability tell us there have to be a few standout performances. Among the core six spider characters, I’d say two dominate the majority of the screentime: Miles Morales and Peter Parker. Outside that group, Miles’ father and uncle are exceptionally compelling and prove that character development isn’t only reserved for the people in tights.

As the protagonist, it would be a problem if Miles didn’t actually stand out. Fortunately, he does, not just for being a cool character, but for having a really satisfying narrative arc. He begins the film on his first day at a new boarding school for gifted kids. Between feeling out of place among his new classmates and missing his old friends, Miles doesn’t want to be there. His relationship with his dad is a little tense both because of his reluctance to take this opportunity and for a few other reasons.

These are all believable teenage actions and feelings. Miles isn’t acting precocious like other kids in film, he’s acting his age. In a lot of other movies with teenagers, their dialogue sounds like it’s coming from an adult. Miles, on the other hand, sounds like 100% himself. He idolizes his uncle who encourages his making of sticker tags and graffiti. His scenes in school show that he has trouble fitting in and even more trouble talking to girls. He’s a believable character which makes viewers really want to see him succeed.

Shameik Moore‘s performance has a lot to do with the character’s believability. Despite lacking the extensive filmography that some of his co-stars have, Moore does a fantastic job convincing us he’s an old pro. His previous work in The Get Down and Dope clearly showed us that he had talent. But, since those properties were cult hits, this movie may serve as his introduction to popular consciousness.

There are actually a few characters named Peter Parker in this movie but the one we’re talking about is the version voiced by Jake Johnson. Johnson boasts a strong comedy based filmography with 21 Jump Street, Tag,New Girl, Comrade Detective, and BoJack Horseman. This experience comes in handy as his version of Peter Parker is more humorously washed up than some of his other counterparts.

When he’s introduced, Peter is fresh off a divorce with M.J. and living in a small studio apartment eating an unhealthy amount of pizza. He has his own growth to go through as he reluctantly takes on a mentorship role with Miles. Johnson does a good job of giving us a complex character whose capable of humor, depression, leadership, and love. Ultimately his version of Peter Parker is exceptionally relatable and the audience can’t help but empathize with him.

The mistake a lot of superhero movies make is in pushing aside the character development of its non-powered cast. Spider-Man into the Spider-Verse could have easily fallen prey to this trap, but the character of Jefferson Davis is not only richly written, but expertly performed.

Brian Tyree Henry has become a recognizable face over the last few years in film and TV. With notable roles in Atlanta, Widows, and If Beale Street Could Talk Henry has been steadily convincing viewers that he has the acting chops to go head to head with some of today’s greats.

Jefferson Davis is different things to different characters in this movie. With Aaron, he’s a sibling who has grown apart from his brother and feels the pain of that distance. With Miles, he’s a father who wants to push his son towards the excellence he knows he’s capable of and struggles to accept the parts of his life that don’t fall under that scope. With Spider-Man, he’s a police officer who can’t condone the implementation of vigilante justice. Overall Jefferson Davis is multifaceted and capable of just as much emotional depth as any of the costumed characters in this movie.

What I can say about Aaron Davis without spoiling the plot is limited. I can say that he’s expertly voiced by Mahershala Ali. With previous live-action work including Moonlight, House of Cards, Hidden Figures, and Luke Cage it’s not hard to believe Ali is capable of playing complex characters.

Unlike his brother, Aaron encourages Miles to put up graffiti and cares less about the kid’s academic success. He comes across as a man who’s probably reached in one or two unsavory places, but also genuinely cares about his nephew. Aaron goes out of his way to cheer him up and gives him advice on how to talk to girls. He cares about Miles just as much as Jefferson, but his priorities and beliefs serve as a contrast to his brother’s.

The fact that Miles has 2 competing role models, each with a seemingly legitimate case for their version of morality does a lot of great things for this move. It keeps the audience from creating an obvious delineation between good and evil. Both sides are intertwined indefinitely and Miles needs to learn how to navigate that as a hero.

The animation in this movie is not only fantastic but a welcome change from the sea of similarity we see on the market today. Ever since the success of Pixar, the 3D modeling version of animation has been considered the superior way to animate. What a lot of people fail to realize is that the medium or style isn’t really what dictates the success of a property.

Simply because you’re using the same style as Pixar, doesn’t mean you’re achieving the same level of greatness. This, of course, assumes production houses like Blue Sky or Illumination can even hold a candle to Pixar (They can’t). It would probably be more advantageous for animated movies to choose the style that best suits the narrative, which is exactly what Spider-Man into the Spider-Verse does.

Let’s start with the more obvious breaks from today’s typical animation style. Different characters in this movie are animated in different styles. This is a unique visual reference to the fact that each character comes from a different reality.

Spider-Man Noir is shown exclusively in monochrome and his shading is done with the same half-tone dots used in comic book printing. Peni Parker’s larger eyes, sharper hair, and special brand of movement reference classic anime. Lastly, Spider-Ham, AKA Peter Porker, looks like he could fit right in with the Loony Toons thanks to his expressive eyes and a simple design.

But What About the Rest?

All the changes mentioned above wouldn’t be as noticeable or as harmonious if they didn’t have the correct foundation to build on. The animation used to show the worlds of Miles Morales, Gwen Stacy, and Peter Parker set the tone for everything else to bounce off of.

In this case, classic comics illustration techniques are employed throughout this move as a way to nod to its roots. Christopher Miller, the producer, even remarked that the animation was meant to evoke “line work and painting and dots and all sorts of comic book techniques.”

It’s All About the Story

Of course, none of these animation decisions would make sense if this wasn’t a comic book property or if it didn’t have clashing realities. They directly reflect the themes and plot of the movie. There are as many animation styles as there are animators. We can’t forget that it’s an art form with infinite visual potential.

When I see a field of similar looking animated properties I get depressed. It means people aren’t thinking about their visual choices. If more movies followed Spider-Man into the Spider-Verse‘s example and made decisions that added to both the experience and themes of the movie, we’d have much more interesting content.

In the end, Spider-Man into the Spider-Verse is an immensely enjoyable movie. This is thanks in large part to expertly written characters with legitimate arcs and development. The willingness to write animated superhero characters like they are real people gives the audience more reasons to relate to the story. We root for Miles and Peter, we empathize with Aaron and Jefferson, and we all want to be as cool as Gwen. With so many characters to connect to in the movie, don’t be surprised if you end up shedding a tear.

What did you think of Spider-Man into the Spider-Verse? Was it awesome? Was it something more than awesome? Let us know in the comments below or on social media! 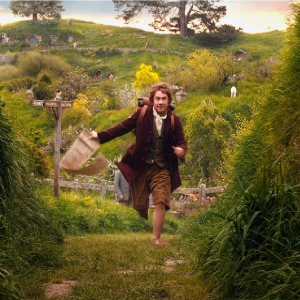 Listen to this article now Peter Jackson, director of the Lord of the Rings and Hobbit film franchises, is selling...