This is a story about a man who accepted a challenge from a friend to stretch his comfort zone and go on a blind date that turned out to be a double blind date. The president of a start-up non-profit organization knew both volunteers to be aficionados of Indian Cuisine: one a telephone interpreter of Spanish, the other a freelance medical interpreter of the same language.

The date was double blind because their only contact had been an email about some aspect of the non-profit with which they were involved. And the fact that the woman had been visually impaired since birth.

The man tells a tale of an event totally contrary to what he expected, filled with amazing, thought-provoking, and sometimes humorous observations. Forgive the title pun as it is very much intended as this woman’s life will teach lessons not easily forgotten to any entrepreneur humble enough to learn.

Know what it is likely to cost you

Risk is said to be a circumstance that can provide significant and desirable benefits or loss to a business’s financial health. One of the first steps in managing risk is an on-going risk analysis. Change is an ever-present variable, so the alert entrepreneur can hardly afford to forfeit his edge. Diligence is key to remaining aware of threats and prioritizing them.

The man making the date says he was surprised by the questions when he phoned to make it. She wanted to know the exact plan for the evening, the time involved, and would have preferred taking public transportation to telling a man she did not know where she lived and getting into a car with him, but use of the public system would have limited how late she could be out on a Saturday. She had even asked him to phone her the very moment he drove onto the property. When he reached her building number, he saw her standing on the sidewalk and knew why she had made that request.

Serial entrepreneur, Jason Oldsen, encourages the entrepreneur to believe in himself, to not be afraid to try his own ideas but to do it intelligently and not just on whims. He encourages other entrepreneurs to identify the possible areas of weakness in a proposed idea and then evaluate how those areas would impact the business, both in positives and challenges. In so doing, the entrepreneur does the risk analysis and does the perpetual risk assessment.

The visually impaired telephone interpreter had a dream. She wanted to be self-sufficient. She wanted to be close enough to her family to be able to reach out, but no so close they would smother her. Because her listening skills were superb, her hearing practically flawless, and she had some prior language study that she enjoyed, she had some language preparation to do. After a lot of investigating and numerous phone calls, her alma mater helped locate a family willing to host a visually impaired foreign student for a year. So with options considered, plans made, precautions taken, she traveled, alone, to South America for a language immersion program.  Traveling abroad alone, to a second world country, and to a foreign-language environment would not be easy for someone with all of the senses in tact.

Use all available resources and pay attention to the warning signs

The admonition of a serial entrepreneur to other entrepreneurs to perpetually evaluate risks is timely because whether a risk remains one, or whether a risk becomes a greater or a lesser one, is apt to change at any time. And the entrepreneur who has not been paying attention may find himself where he does not want to be. The fact could not be more true of an on-line business store.

The man who told the story of a blind date with a visually impaired woman relayed that he was impacted by the measures she took to protect herself. For example, the woman often took public transit to the intersection nearest the restaurant they were patronizing that night (the library, a mall, and other establishments were also there) so she became alarmed when the effects of topography in the car did not match what she knew from the bus. She was pacified when he pulled into the restaurant parking lot sooner than she expected and because he explained he had taken back streets to reach their destination because they enabled them to avoid traffic.

The man relayed a sort of amusing end to the date, though probably less so to her. As they walked from his car toward her apartment, she informed him he could return to his car, that she would be ok. He, however, not understanding what she was doing and intending to be the gentleman remaining until she was tucked safely inside her door, was embarrassed as she became increasingly agitated the longer she waited to hear his footsteps walking away. The day finally dawned on his marble head and he began walking away. Entirely by her design, he never did learn which apartment was hers.

Know what to do with the cards dealt you

A point never too late or too tired to reiterate is that the entrepreneur needs to know what he or she brings to the table. He/she cannot be confident of his or her own ideas if the person lacks an emotional appreciation for his/her strengths and weaknesses as the business owner. Already stated is the need for perpetual risk assessment, but the serial entrepreneur makes one further suggestion, which is to document risks to the business as well as identifying and monitoring them. Putting it all on paper sort of brings them home, so to speak.

The man telling the story about a blind date with a blind woman relays how he was continually surprised throughout the event. He wrote that her olive skin covered an ample figure, her hair hung luxuriously healthy to her shoulders, and the only disconcerting issue with her beautiful blue eyes was that they never moved. She smelled faintly of fruit or flowers and not as a medicine cabinet as the man had expected. And she responded to a bone-headed question with grace and a sense of humor. Having already noticed that she was very safety conscious, just to make conversation as they sat eating, the man reports having asked her if she uses a night light or if she would be returning to an unlit apartment. She laughed and said she had never seen the need for one. He looked up and she added smiling, “Besides, just because I am blind does not mean they give me electricity.” Also contrary to his expectations, she was engaging. The man reports she answered questions about herself, but she asked him several personal questions too.

A major reason for an entrepreneur to know what he or she brings to his/her own table is to be able to determine whether he or she can make short-term self improvements or whether help would be needed to effectively manage some of the risks.

The man further wrote that she earned his respect supremely at the buffet.  She did not seem the least bit bothered if they took longer going down the table. At the buffet, she did not want a taste of everything. She asked him to tell her each dish and, further, asked him to place the spoon in her hand and then guide her hand to the front of the tray that interested her so she could spoon her own food onto her plate.

The man further indicated that her sense of danger was as real as anyone’s. She had said she likes swimming and going to the park lake where she liked hearing the waves lap against the shore. She enjoyed listening to the children play in the water. The man reports being almost speechless at her response when he asked if she had ever been to the ocean. She told him she had but she found it frightening because it sounds so big.

The entrepreneur and the unseeing woman have a lot in common. Both benefit from past mistakes or experiences. Both have only the present and all the resources available to them here, today. Neither can see the future yet both have every reason to face it with optimism because, with the right decisions, the right input and precautions, risks can be assessed and controlled and they have every reason to believe their ideas may be useful and a future worth pursuing is there for them.

What experiences have you had on a blind date? Let us know down in the comments. 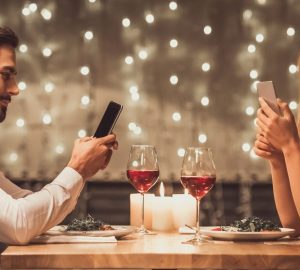 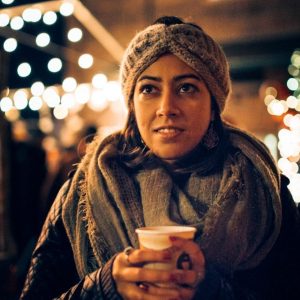 Why There's Still Hope For Restaurants And Bars Closing This Winter

Listen to this article now It is not a surprise that restaurants have taken a major hit since March 2020...