American expat Louisa Loring doesn’t exactly expect to break the cultural barrier between Italians and Americans with boxes of cake mix. But it can’t hurt to try, right?

Like many 21-year-old students that study abroad, Loring returned to Smith College in Massachusetts after her year in Florence with only one thing on her mind: going back. And so, a mere three weeks after graduating in May 2013, she did.

Contrary to what one might expect, Loring doesn’t find Italian pastries to be anything groundbreaking, so the cravings for the American desserts she had baked as a kid began soon after moving to Italian soil full time. Six years and two children later, she found herself with some free time on her hands, but she wasn’t looking to fill it with a desk job. The nine-to-five life, to put it frankly, isn’t for her. Instead, she devised Make and Bake, a business born of its founder’s creativity with the hope of tapping into something similar in the consumer.

Loring and Gaia d’Alò, her Italian business partner and best friend, joined forces to instill the best of both of their culinary worlds in their product: boxed American dessert mixes made with solely Italian ingredients. The boxes are sold on the Make and Bake website and in some shops around Florence. They can also be purchased through various home-delivery services as well.

Make and Bake seeks to ensure that the baking experience is as undemanding as possible for the consumer—the mix requires little exertion, and the instructions appear in both Italian and English. According to Loring, Make and Bake would be easy to use for even a person that has never picked up a spoon before. It’s designed for everyone, from the American study abroad student to the Italian nonna.

(Above) Louisa Loring cofounder of Make and Bake. Photo courtesy of Andrea Pelatti

Don’t be fooled by the simplicity of the product, though—Loring and d’Alò have worked tirelessly to perfect it. Its creation involved a lot of trial and error as they attempted to find recipes that maximize both taste and durability. In Loring’s words, “the best recipe may not be the one that tastes the best, but the one that won’t be rock hard the next day.” The pair also seeks to create multipurpose mixes that can be used to create more desserts than they are intended for—even vegan ones. The three base mixes are Chocolate Chip Cookies, Carrot Cake, and Brownies, and the alternative recipes are posted on the Make and Bake blog.

Based purely on online sales Carrot Cake is the least successful of the three, because this traditional American dessert is hard to conceptualize for the mostly Italian clientele. However, At the Mostra dell’Artigianato Internazionale, the fair at which Loring and d’Alò launched the product in April 2019, it was the Carrot Cake mix that took the proverbial cake with the most sales—which Loring credits to there being samples available for the public to taste. The fair-goers who paused at the Make and Bake kiosk found that they quite liked what online customers have been wary of without a sample.

(Above) Gaia d’Alò cofounder of Make and Bake. Photo courtesy of Andrea Pelatti

In fact, when asked what the most challenging aspect of Make and Bake has been, Loring swiftly replied that “breaking the Italian perception of American food and culture as artificial, low quality and lacking tradition” has been by far the highest hurdle. Encouraging the Italian public to accept the possibility that American desserts may actually be as tasty as their own isn’t easy. “It’s hard to tell an Italian that food products don’t have to be completely Italian in order to be good.” Thinking like an Italian (and understanding what it is that would make one partial to a cake mix) does not come naturally to Loring—one of the many reasons she is grateful for d’Alò’s insight as a business partner.

Make and Bake: The Best of Both Worlds

Even if seamlessly infiltrating the Italian mind is not in Loring’s toolkit, there are benefits to an American upbringing and education that she contributes to Make and Bake. For example, she and d’Alò orchestrated a giveaway at the Mostra dell’Artigianato in April. The people that followed them on instagram were entered into a raffle, with the chance of winning several boxes of mix delivered to their home. “You have to spend money if you want to make money,” Loring explained. “Using social media as a business tool is quite an American concept, and it’s accessible. Nobody else at the fair was doing that.” Her specific experience as a Smith student has certainly contributed to her business-related expertise as well, as alumnae in Florence have helped her find people and pathways to tap into. “Smith taught me to never forget the power of meeting someone,” said Loring. “The network is where it’s at, within and without of Smith.”

Over the next few months, Make and Bake’s founders look forward to expanding the business beyond the confines of Florence, perhaps with the help of connections in Milan. For now, though, they want us to know that we shouldn’t be afraid of trying something new. Maybe, in encouraging Italians and Americans alike to think outside of the box, so to speak, Loring and d’Alò are transcending the context of a humble cake mix, and facilitating a larger opportunity for cross-cultural connection.

What do you think of Loring and d’Alò’s efforts to bring American desserts to Italian culture? Let us know down in the comments.

5 Tips for Surviving a Crisis as an Entrepreneur

Emma Hempstead is a graduating senior from Smith College in Massachusetts. She likes to write about literature, health, and cross-cultural connection. She is interested in how our rapidly globalizing world necessitates language, media, and storytelling as vehicles for communication and learning. 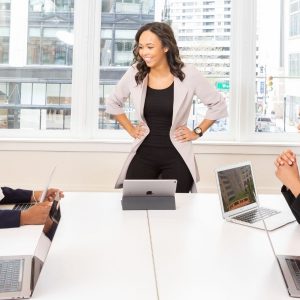 How To Be A Successful Leader Part 3: Be The Core Power

Listen to this article now So you’re still running that team, kudos. Question, have you been doing some self-examination lately?...