Fred Mwangaguhunga is an angel investor, journalist, and a self-made New York millionaire entrepreneur. As CEO of MTO News (Media Take Out News), he created an online platform that caters specifically to African American celebrity culture. Even though the COVID-19 pandemic proves to be a problem for businesses both great and small, Fred says there has never been a better time to launch your startup. See his positive insights on how to manage a business during this crisis.

Shortly before he was born, Fred Mwangaguhunga’s parents immigrated to the U.S. from Uganda. He was raised in Queens, New York and says that growing up he always wanted a job that made him feel important in the world. After obtaining his JD/MBA from Columbia University, he fulfilled his dream by working several years as an attorney on Wall Street. Meanwhile, Fred also attended business school and graduated shortly before a recession hit. Even though there was a downturn in the economy, he did not let that deter him from launching a startup.

Due to the trouble he experienced finding a reliable dry cleaning service in New York, Fred decided to take matters into his own hands. He founded the first ever door-to-door laundry service, marking the jumping point for his journey into entrepreneurship. His successful business serviced many celebrities, including Mariah Carey and The Victoria’s Secret Fashion Show. Thanks to the rising popularity of his lucrative business, Fred eventually sold his laundry service and set his sights on a new business venture.

“At the time, African American celebrities weren’t being picked up in a lot of entertainment sites. So I looked at the blogosphere as a new industry and opportunity to promote African American representation.”

In 2006, while blogs were still on the rise, Fred recognized a market need for African American-centered websites. He decided to capitalize on his past business experience and launch his own site based on celebrity stories. Today, MTO News is reported as the #1 urban celebrity online news outlet. Since its conception, it has grown to reach over 50 million monthly visitors. What makes Fred’s site so successful is that it caters to the needs and interests of African Americans that often get overlooked by other media outlets. MTO News also prides itself on connecting to readers with its own brand of distinct humor.

In 2014, Fred was named as one of the “Top Media” people by The New York Observer. He has also shared his digital business insights on various programs like Bloomberg Business Report, Access Hollywood, and The Wendy Williams Show. With so many accomplishments under his belt, Fred is now taking steps to expand his MTO News brand. However, with the current pandemic, certain plans are understandably on hold.

Like all businesses, MTO News has been affected by the coronavirus, especially when it comes to ad spending. According to CNBC, prices for digital ads are down 35% and Fred says MTO News is not immune to the circumstances. However, he is remaining optimistic and is using this time to build partnerships wherever he can.

“We expect this to be temporary, so we continue to go through it. I think we’re positioned well to sustain [the pandemic] and we’re looking to take advantage of opportunities when we get on the other side of it.”

Is Launching Your Startup During the Pandemic Worth it?

Contrary to what you might believe, Fred says that now is the best time to launch your own startup. Because we’re in a pandemic, people are more willing to make deals than they were six months ago. Not only are you yourself sitting at home, so is everyone else. People want to make connections during this time. The key is building strong relationships with the right people.

Because of the massive layoffs all around, employees are eager to justify themselves. This means bringing their employers great startup proposals to prove their value to the company. Now more than ever, these profitable deals are super appealing to companies and angel investors.

RELATED: HOW TO FIND ANGEL INVESTORS WITHOUT CLIPPING THEIR WINGS

Of course, it is natural to have some hesitations. But according to Fred, as long as you have the will and resources it is always a good time to launch your startup.

“When there’s a fire going on, all people see is flames. But once the fire is over, it usually leaves fertile ground behind.”

Even if obtaining funding is hard right now, the important thing to do is prepare for what’s coming on the other side of this pandemic. Use this time wisely to build as many relationships and new skills as you can. Most recently, Fred himself has also begun diving into the world of tech and venture capitalism. He is remaining productive by continuing to make connections and is excited about the prospects that he has been pitched. Although the pandemic has created some limits, Fred is confident there are many promising new projects on the horizon.

What do you think of Fred Mwangaguhunga’s business tips to launch your own startup? Let us know down in the comments. 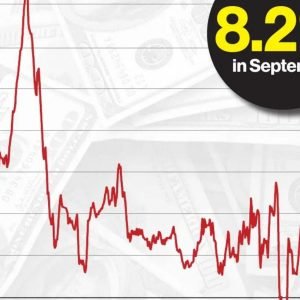 In September, inflation reached 8.2%, which was more than projected, as rent and food costs skyrocketed.

Listen to this article now In the United States, inflation rose 8.2% in September, a larger-than-expected increase as stubbornly high...