Who are Eddie Yang and Yaxi Yang?

Eddie Yang and Yaxi Yang are an entrepreneurial brother and sister duo and the cofounders of Visual Feeder. In just under two years, their startup has worked with many noteworthy clients such as Lyft, Tedx, Adidas, Bacardi, and the Center for Disease Control (CDC). Earlier this year, they were also chosen to be part of the Techstars Chicago 2020 accelerator program.

More than a Billboard

Founded in 2019, Visual Feeder provides businesses and landlords with the opportunity to turn vacant spaces into branded visual experiences. In an era where the world is switching to online marketing and the billboard industry is in decline, Visual Feeder is giving companies more than just an advertisement. By using projection mapping, they are able to display custom interactive videos on any window or opaque glass structure. They also use sensors to track performance and consumer outreach in real time.

What makes Visual Feeder so unique is that they aren’t spending thousands of dollars to erect billboards in the center of metropolitan areas. Instead, they are enhancing structures that are already standing. So far, Visual Feeder’s work has appeared in retail spaces and exhibits all over Chicago, Miami, and Singapore.

Eddie and Yaxi grew up in St. Paul, Minnesota in a very creative family. Both their parents are artists and their father has had galleries in the U.S., Switzerland, and China. Eddie says he spent most of his days drawing and studying the art in their studios. After their family moved to Chicago, Eddie attended Columbia College for film and ran a side hustle as a DJ and music composer.

When he landed a gig as the DJ for a Tedx event, Eddie was concerned the audience would be bored just watching him mix music on stage. Therefore, he came up with an idea to do projection mapping and was granted the budget to build a structure. This was the first animated visual he ever designed and the first step towards Visual Feeder.

After his successful Tedx performance, Eddie saw an opportunity for businesses to monetize large spaces and windows that were not being used. He came up with the idea to start another side project to help brands reach audiences in new and exciting ways. With Yaxi obtaining her degree in business administration from DePaul University, the two teamed up to cofound Visual Feeder.

The Future of Digital Advertising

What originally started off as a passion project has boomed into a bespoke digital advertising company. Eddie and Yaxi now have an entire team that works together to create dynamic visuals for brands. While the brother and sister cofounders both have a hand in each project, Eddie focuses more on creative direction and Yaxi specializes in business management. Eddie says the most beneficial part of working with family is that they can trust each other 100%.

Recently, Eddie and Yaxi were excited to learn that Visual Feeder was selected as one of 10 Chicago startups to be featured in Techstars 2020. Techstars is an accelerator program that showcases the power of the city as a booming tech environment. Eddie and Yaxi were selected due to their passion and commitment to leveraging Chicago’s startup ecosystem.

Currently, Visual Feeder is partnering with the CDC to help spread word about public health safety. They have activated many of their visual spaces to help remind people to stay home and practice social distancing. Though most out-of-home advertising is on hold due to Covid-19, Eddie states this is only temporary. He is confident that what Visual Feeder is doing is the future of advertising and is hopeful for his and Yaxi’s startup to continue blossoming once the global pandemic is over.

“Billboards are outdated. Visual Feeder is the future.”

What Keeps Them Up at Night?

“Running a business is beautiful in a way where you have new problems to solve every day and that’s what’s exciting.”

What is Eddie and Yaxi’s GREY Style? 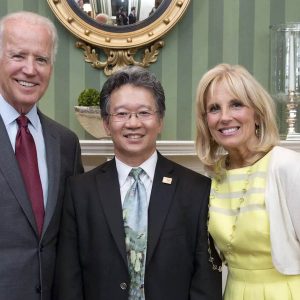