Contents
Who is Billy Dec?COACT: Collaborative ActionChicago’s Entertainment KingFood. Roots.What Keeps Him Up at Night?If He had a Billboard for 24 Hours, What Would it Say?

Who is Billy Dec?

Billy Dec is an actor, producer, television food contributor, and multifaceted entrepreneur. By combining over 20 years experience in both the entertainment and hospitality industries, he has won 2 Emmy Awards and launched several business ventures through his nightclub development and management company, Rockit Ranch Productions. He is also the founder and CEO of Elston Films, which produced his new Filipino cultural documentary Food. Roots. on PBS.

Most recently, Billy founded the COACT Agency, which combines marketing, advertising, and production under one roof, so to speak. According to COACT, traditional ad agencies are outdated. COACT uses top global talent who act and work together to produce bespoke brand solutions. Since its launch in May 2019, the 300 people in the creative community have worked with the likes of HBO, Showtime, Red Bull, Absolut, Adidas, and Akira to name a few.

COACT is a leader in new alternative workforces that operate with no overhead, thus saving on costs associated with office expenses. With the freedom to build a team of the most talented individuals from anywhere in the world, Billy is ushering in a new era of marketing that defies the traditional 9 to 5. As CEO and CCO of the company, COACT is the culmination of every ounce of business experience Billy has gained throughout his life.

Billy Dec was raised in Chicago by his Filipina mother and caucasian father. He notes that as a kid, he struggled with how to celebrate his Filipino roots while fitting into America’s success driven lifestyle. Eventually, he learned to balance the two and enjoyed doing odd jobs like cleaning yards, making food, and working as an altar boy at weddings. By the time he was in sixth grade, he took a job as a coat checker in a Chinese restaurant and was fascinated by how customer’s expectations changed from the beginning of their meal to the end. He went on to help in all aspects of the restaurant, from the front-of-the-house to back-of-the-house and even in the office.

Unfortunately, when he was in high school, both his father and brother fell ill. His family lost their house and their father’s company and Billy took it upon himself to take care of his mother and sister. While working as a doorman at a nightclub, he learned how to build strong relationships and networking opportunities. Eventually, he began to orchestrate exciting events by pulling together the best people he could find.

By continuously working, Billy was able to pay his way through college and even opened his first night club, Solo, during his first year of law school. Billy quickly became known as the entertainment king of Chicago and later founded Rockit Ranch Productions in 2002. His company is responsible for developing renowned restaurants and nightclubs such as Rockit Bar and Grill, The Underground Chicago, and Sunda New Asian. Thanks to his creativity, Billy won his first Emmy for a Travel Short, inspired by his journeys back and forth to Southeast Asia, that led to the opening of Sunda. During this time, he also began appearing in various television roles, including as a food contributor for Good Morning America and Today.

From launching his first night club named Solo, to his latest business venture COACT, which literally means collaborative action, Billy’s journey as an entrepreneur has come full circle. He has learned the power of working with a team and is now innovating the world of marketing for people who are tired of the 9 to 5. However, through all his achievements, Billy never forgot his roots. In 2014, he was appointed to the Advisory Commission on Asian Americans and Pacific Islanders by President Barack Obama. For five years, Billy advocated for AAPI rights, including helping empower youth in the community by leading discussions against the severity of bullying throughout the country.

“Growing up feeling like a minority not of significance to the mainstream majority, I’m increasingly energized with pride that magnifies as we celebrate the depth and diversity of culture, culinary, beauty, history, and potential, that makes up the now fastest growing racial group in the country.”

When two of his oldest living relatives in the Philippines recently passed away on the same day, Billy realized a part of his culture was disappearing. Therefore, he decided to travel back in time and search for his last living relatives in the Philippines. Food. Roots. documents Billy’s exploration as he uncovers the lost food recipes of his ancestors—traveling to remote islands, walking on foot, climbing mountains—all to reconnect to his roots. His documentary allows him to share his experiences with the world and help Asian Americans not to forget about their past. Food. Roots. is set to air on PBS later this year and is currently accepting donations through WCTE.

“I want so much for my teammates, employees, investors, partners, clients and customers. I can’t stop thinking about how to make sure everything turns out great, over and over again, for everyone, always.”

If He had a Billboard for 24 Hours, What Would it Say?

“I’m so hyped by our new company COACT (definition: to act and work together), a community of top independent creatives around the country, collaborating freely, creating value, innovating, solving problems…that I just think there is something bigger there, for all in world to benefit from. So perhaps I’d say…COACT, For A Better World.”

Do You Need a Tech Degree to Start a Tech Business? 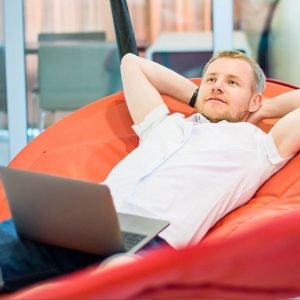 5 Ways To Overcome Procrastination While Being Patient With Yourself

It can be easy to feel lazy or worthless when hit with a wave of procrastination, but beating ourselves up...